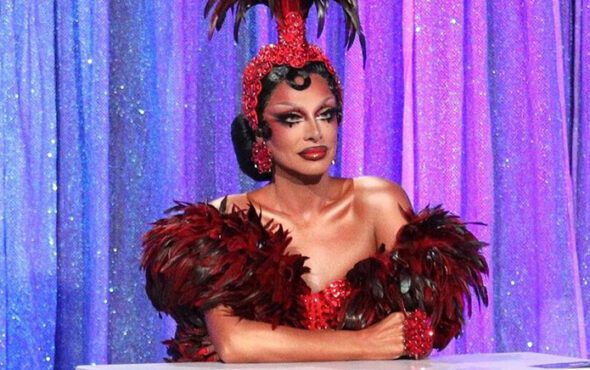 In an exclusive interview with GAY TIMES, Raven spilled the T on who she wants to see snatch this season’s Drag Race UK crown.

After finishing as the runner-up on both Drag Race US season two and the first-ever All Stars, Raven knows a thing or two about what it takes to do well in the competition.

Since the show’s ninth season, she has even served as RuPaul’s makeup artist – something that earned the star her first Emmy Award.

From her time competing on Drag Race, to appearing on it as a guest, to working behind the scenes alongside production, Raven has seen a lot of queens come and go – but one UK contestant stands out for her the most on season three.

“Well, I think you’re going to know who I’m going to say,” she says when asked who she sees as the front runner, “Krystal Versace.”

Raven was on set for the filming of Drag Race UK, meaning she got to see a lot of what the queens delivered in person.

The Fashion Photo Ruview co-host continues: “When she first walked in I went ‘Oh!’ and I remember everyone looking at me and going, ‘She looks like you, she literally looks like you’ and it’s not something that I’m not used to not hearing, I’ve heard that, you know, for many years, ‘This queen looks like you’, ‘Oh, I met this queen who paints like you.’ but she… it was like, oh my gosh.

“But then, to see all of the looks she presented and, you know, it’s just – she’s a child. She’s what, 20, 19? And to be doing this and doing at that calibre with those huge hip pads and then cinching that waist down, like she’s making a caricature of herself and I loved it. I loved it.”

Despite some of this season’s queens serving “subpar” looks, Raven couldn’t help but fall in love with them.

She explains to GAY TIMES: “You know, even though River Medway’s looks were kind of, subpar… I just loved River. Every time River walked out, it was ‘Well, I know this isn’t that great but I’m going to sell it to you and you’re going to buy it’ and you just can’t help but love her.”

Raven also reveals that she is a fan of Vanity Milan and Choriza May, despite some of their outfits being “questionable” at times.

The Drag Race franchise is rapidly expanding to include new All Star and international editions, giving fans more of the show than ever before – something that Raven is “all about”.

“But, any way I can get drag I’m going to take it,” she tells GAY TIMES.

“So now that there are all these versions of Drag Race out there, of course [people] want to go ‘Girl, it’s too much, why are we getting more?’ Why not? The only reason more is popping up is because people want it.

“So, I love that drag is now in everyone’s normal, daily life. People talking about it at work, straight men, gay men, straight women, gay women, you know. Any type of person in the world is looking at drag and going, ‘Oh my gosh, this is fabulous.’ So, I’m all about it.”

Catch the premiere of Painted With Raven on Thursday 25 November exclusively on the streamer of all things drag, WOW Presents Plus. Subscribe by clicking here.