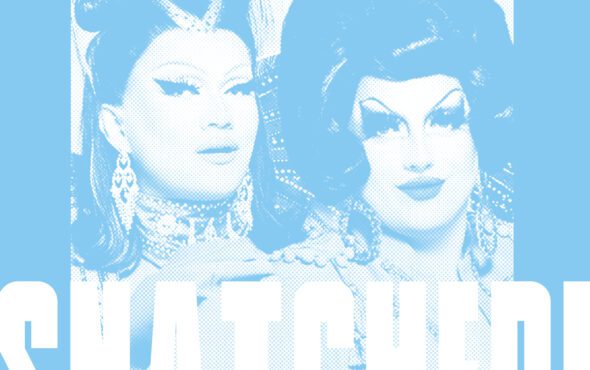 Choriza May and River Medway opened up about their controversial Drag Race UK eliminations on the latest episode of Snatched!

This week, Sam and Umar discuss the sixth maxi-challenge of RuPaul’s Drag Race UK season three, which saw the top seven queens impersonate celebrities for the Snatch Game in front of Nadine Coyle and Judi Love. Later, Lulu made her Drag Race debut as she watched the contestants sashay down the runway in fruit-inspired couture.

For their impersonations of The Only Way Is Essex star Amy Childs and Cuban novelty singer Margarita Pracatan, respectively, River Medway and Choriza May received harsh critiques from the panel and were forced to compete in the lip-sync smackdown to Lulu’s classic hit, Shout.

In one of the most shocking moments in Drag Race UK herstory, RuPaul decided to give both queens the chop. Before he told the queens to sashay away, he told them: “Now, you may not have gone all the way but my love for you is here to stay.” It marked the first double sashay since US season eight, when Dax Exclamation Point and Laila McQueen failed to impress Ru with their lip-sync to Gloria Gaynor’s legendary disco anthem I Will Survive. The first ever double shantay occurred in season five, when Honey Mahogany and Vivienne Pinay competed against each other to the beat of Britney Spears’ Oops!… I Did It Again.

After their exits, Choriza and River joined Sam and Umar on Snatched! to discuss the moment, which has garnered uproar from the fandom.

“It was very uncalled for. I felt that was a very disrespectful thing to do for the both of us, a double elimination can mean a lot of negative things for a queen’s career,” said Choriza. “We have been working so hard to that point.

“It was so hard to film a show like that too, in a pandemic, preparing for it, everything. I did feel, ‘There’s no need for this.’ I did feel very disrespected.”

Choriza added: “I felt really bad for me and my sister.”

Listen to Choriza and River break down their eliminations on the latest episode of Snatched!, which is now available on all streaming services including Spotify and Apple Podcasts. You can also read Choriza’s interview here in full and River’s here.

Oh, and while you’re at it: make sure to purchase and stream Choriza’s incredibly bonkers debut single, My Pussy Is Like a Peach, right now for healthier skin.

You can also watch the music video, featuring stars from Drag Race Espana, here or below.