Son of homophobic Nigerian politician comes out as “gay AF” 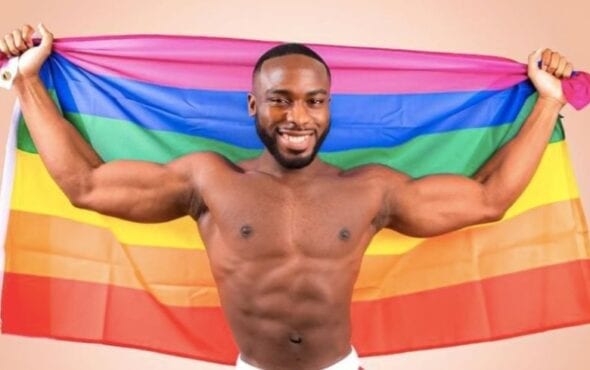 Bolu Okupe, the son of homophobic Nigerian politician Doyin Okupe, has come out as gay.

Bolu Okupe, a personal trainer living in France, and the son of homophobic Nigerian politician, Doyin Okupe, has come out as gay.

In an Instagram post, Bolu confidently stated that he was “Gay AF” in a pair of rainbow shorts while holding a Pride flag aloft.

Since coming out, Bolu has had to fight off homophobic comments, with one saying he’d “be a corpse” if he tried returning. But hitting back, Bolu said: “Your whole mentality is tragic.

“I feel sorry for you. Your religion has turned you into a psychotic imbecile that you think it’s okay to kill people?”

He has since turned off the comments for his coming out post.

His father, Doyin, who currently serves as the Nigerian president’s Senior Special Assistant on Public Affairs, had a negative response to his son’s coming out, posting on Twitter: “I have been aware of this his new orientation for a while now.

“He knows that as a Christian and a witness for Christ (an evangelist) I am vehemently opposed to homosexuality as it runs contrary to the avowed precepts of my Christian faith.”

He added: “Here I see a major spiritual challenge ahead but I know as my God liveth, this whole saga will end up in Praise to the Almighty Jehova who I serve day and night.”

In the post, Doyin wrote: “Bolu will still be celebrated on this wall, in Nigeria and globally, in the name of Jesus.”

He gave some crumbs of support to his son, saying: “Bolu is not a criminal. He lives in France where Homosexuality is not a crime. “His present mind set and sexual orientation does not conform to Christian Doctrine which I hold to with my life. But I am certain that with the boldness he has made his declaration, he will still use same attribute to serve God and boldly declare His Glory in Christ Jesus.”

Nigeria is one of the most dangerous countries for the LGBTQ+ community, and has been ranked as the worst place for LGBTQ+ safety, due to the prospect of 14 years in prison or the death penalty for homosexuality, as well as the criminalisation of LGBTQ+ rights discussions.

Homophobia is rife throughout the country, and in 2019 an influential police chief, Dolapo Badmos, told LGBTQ+ people to leave the country or face prosecution.