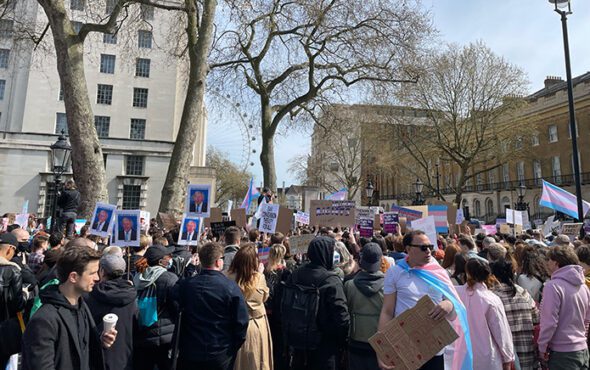 Six in 10 people (58%) intending to vote for the Conservative Party want a ‘conversion therapy’ ban to cover trans people, a study has found.

This figure rises slightly when it comes to sexual orientation, with 63% of Tory voters believing the practice should not be allowed to take place.

Only 19% of Conservative respondents want ‘conversion therapy’ for gender identity to be legal.

Support for a ban was higher among Labour voters, with 72% and 68% backing a ban for sexual orientation and gender identity, respectively.

It was also determined that two-thirds of Britons (65%) more generally want to see it banned when trying to change someone’s sexual orientation, with 62% also having this view when it comes to gender identity.

The govt may have decided that sexual orientation / gender identity Conversion Therapy should be treated separately, but the public does not: Britons want to see both banned

Thousands of people took to Downing Street on 10 April to protest the UK government’s decision to exclude trans people from a ban of so-called ‘conversion therapy’.

1,826 adults in Britain were surveyed as part of the research, which was carried out by YouGov and The Times from 6 to 7 April 2022.

The findings can be viewed in full here.