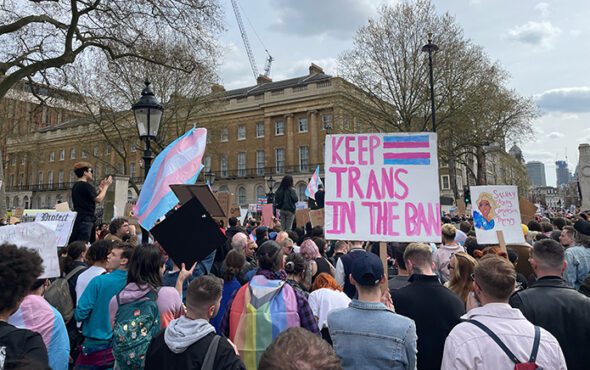 Thousands of people took to Downing Street on 10 April to protest the UK government’s decision to exclude trans people from a ban of so-called ‘conversion therapy’.

“Trans rights are human rights” and “LGB with the T” were among the many phrases chanted by the crowd, which tripled in size in the space of around 30 minutes.

GAY TIMES attended the demonstration, which was so big that the police had to redivert Whitehall’s traffic around it due it spilling onto the street.

An array of LGBTQ+ activists and celebrities showed their support, with the likes of Jayne Ozanne and Peter Tatchell giving speeches to the crowd.

“What do we want?” Ozanne, one of the protest’s organisers, shouted into a megaphone. “A ban,” the crowd responded. “Who must be in it?” she asked, with the audience united in declaring, “Trans people.”

Those at the event held placards and waved Pride flags in the air. Iain Anderson, the government’s LGBTQ+ Business Champion, resigned because of the U-turns made on the ban and was in attendance at the protest.

“It was really important to be here because I just believe that any ban on ‘conversion therapy’ firstly should take place, there shouldn’t be any kind of flip-flopping on it, but secondly, also that the ban includes all LGBTQ+ people,” he told GAY TIMES. “So, it was important for me, just empathetically, to be here in Whitehall.”

Drag Race UK stars Ella Vaday and River Medway also showed their support for a comprehensive ban of the practice on the day. Ella added: “I am disgusted at what the government’s doing in not banning it for the trans community as well. It needs to be banned completely.”