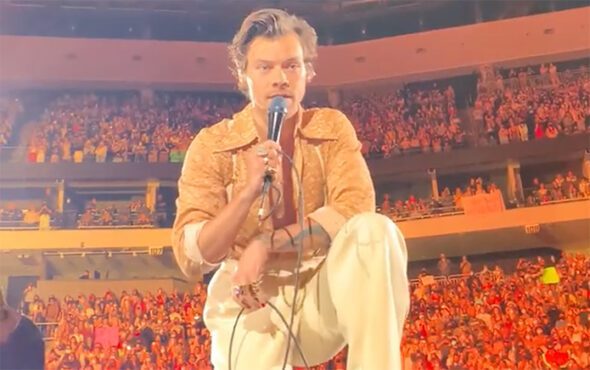 During one of his Love On Tour shows in Milwaukee on 3 November, Harry Styles helped a fan come out to her mother.

When the From the Dining Table hitmaker saw it, he instantly ran towards her and held the microphone towards her so she could make the announcement.

The young girl proceeded to tell the former One Direction star that she was fearful due to there being “a lot of people” around.

Styles responded by asking if she wanted him to tell her mother for her, which the young girl agreed to.

He then ran across the stage singing, before declaring: “Lisa, she’s gay!”

The camera on the big screen in the Fiserv Forum arena instantly panned to the girl’s mother, who was overwhelmed as the crowd cheered in support.

Shortly after the show, the fan took to Twitter to thank Styles for his help and said she will remember it “forever.”

Styles has been showing his love for the LGBTQ+ community throughout his current tour.

At the Enterprise Center in St. Louis on 15 September, he performed Treat People with Kindness, a song that some have seen as a nod to the LGBTQ+ community due to its emotive lyrics.

Fans at the show were sent into a frenzy by the star when he took out a Pride flag featuring the inclusive Daniel Quasar design and began excitedly waving it in the air.

“Be whoever it is you want to be in this room tonight,” he told the audience.

They instantly went wild for the move and loudly screamed in support of the Watermelon Sugar singer before he treated them to a solo rendition of What Makes You Beautiful.

The outfit and his Pride flag display quickly went viral on Twitter, as one keen-eyed fan drew comparisons to a colourful feather outfit worn by Elton John on a tour of his.