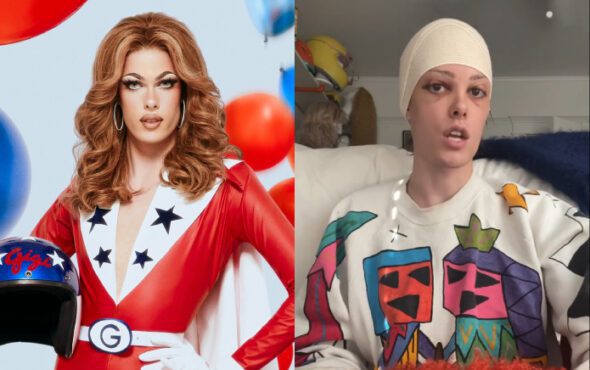 Gigi Goode has come out as a trans, non-binary person using “she/her” pronouns in a post-op video on social media.

After sharing that she was gender fluid during her season of RuPaul’s Drag Race, GiGi has now taken to Instagram to share an eight-minute-long video about what her life has been like over the last several months.

“I don’t even know how to start this,” she said in the clip. “Let’s just jump right into it, you know what I mean? I guess, without beating around the bush, around eight months ago in January, right at the beginning of the year, I decided to begin the process of hormone replacement therapy.

“For those of you who don’t know, that is the process of taking estrogen and testosterone blockers — differing on the person — as a means of bringing in the woman and pushing out the man.

“At least that was my process with it.”

Gigi explained that the pandemic gave her a lot of time to be alone and reflect, as well as allowing her to watch the HBO Max series Veneno – something that was pivotal to her journey.

The Drag Race star explained that the show’s trans cast “completely opened my mind up to who I am and who I’m supposed to be and, to me, that’s a trans non-binary person”.

Despite beginning the process at the start of 2021, this is the first time Gigi has discussed it publicly.

“I know the influence that strangers on social media have on these types of situations and so I knew when I started that I wanted this to be a journey that I was going on by myself on my own without any input from the outside world,” she said.

Gigi revealed that the only people fully in the loop about her transition were her mother and the House of Avalon, a group of friends (including Drag Race winner Symone) who live across the street from her Los Angeles home.

The Instagram video sharing the update was recorded four days after Gigi’s facial feminisation surgery, which is a group of procedures tailored to the patient in order to make the face align more closely with society’s idea of ‘feminine’.

“I identify as a trans/nonbinary person and I prefer she/her pronouns,” she continued.

The model also shared that she will be legally changing her name to Gigi, something which has so far been a long and complicated process.

The cannabis activist, dancer and musician, who rose to fame as a contestant on the sixth season of RuPaul’s Drag Race, said she has “presented as female for the last 10 years” through the art of drag, which made her ease into her identity in a way that “made it more explainable to the masses”.

Laganja credited her close friend and season six sister, Gia Gunn, with helping her through her transition.

Gia came out as transgender in 2017 and made herstory for the Drag Race franchise as the first openly transgender All Stars contestant.

Feeling all the love today ❤️‍🔥
Thank you all so much