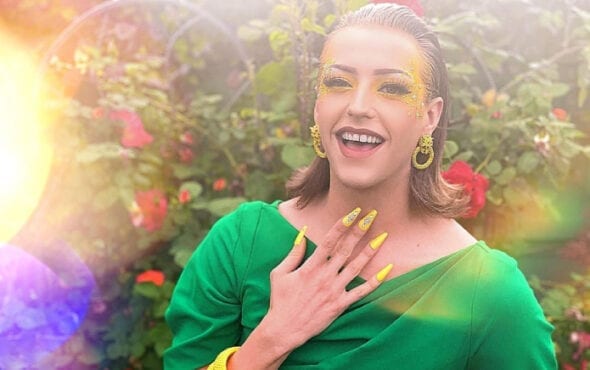 Laganja Estranja has come out as transgender.

The cannabis activist, dancer and musician, who rose to fame as a contestant on the sixth season of RuPaul’s Drag Race, said she’s “presented as female for the last 10 years” through the art of drag, which made her ease into her identity in a way that “made it more explainable to the masses”.

Speaking with Entertainment Weekly, Laganja revealed of her journey: “I do want to be able to express this at all times. I just got my haircut – a very feminine cut – and in one week already, my life has changed. I’m able to come off stage and take my makeup off and still see a beautiful woman in the mirror. It’s powerful.”

The legendary entertainer came out to her “incredibly supportive” family one week ago, although she confided in her closest friends in 2020 and has been “comfortably, fully committing” to who she is as transgender woman for a year.

“People think that when you’re trans that you’ve wanted to be a girl your whole life; yes, that’s partly true [for me], but it’s also true that I’ve wanted to be male my whole life to fit into what society deems as normal,” she explained.

“But, that isn’t my truth, and I’m daring to take this on. I tried to be male and be in-between and nonbinary. The truth is I’m a feminine entity and I can live this life.”

Laganja credited her close friend and season six sister, Gia Gunn, with helping her through her transition. Gia came out as transgender in 2017, and made herstory for the Drag Race franchise as the first openly transgender All Stars contestant.

“I feel blessed to have had that experience. Our transitions are different and will manifest in different ways, but it was so incredible to see someone live their truth and to be happy,” said Laganja.

“I’m so thankful that Gia didn’t push me and has allowed me to take my time. Of course she’s encouraged me. From day one when we met, she was like, ‘Oh honey, you’re a woman!’ She’s known longer than I have!

“She allowed me to take my time and continued to be supportive…. by physically seeing her change and the fact that she’s been able to live a happy life and have lovers and have boyfriends – all the things trans women, I think, worry about when they came out – gave me hope and encouragement.” The star hopes she’ll inspire other trans and gender non-conforming people around the world to come out and live their truth, and has partnered with trans organisation FOLX to help provide healthcare for the community.

“I’m going to be part of a wave of change. I’m so happy,” she continued.

“I feel so beautiful and empowered, and, finally, I’m looking back at who I am in the mirror, and it’s such an incredible feeling. If anyone is struggling with it, breathe and accept it, because once you do, it’s incredibly empowering.”

Following the article, Laganja said coming out as transgender has made her feel “empowered” and thanked those within the trans community who came before her and “fought so that my coming out could be joyous”.

She wrote: “I am so proud to identify as TRANS and to be living my truth. Happy PRIDE, you are beautiful as you are.”