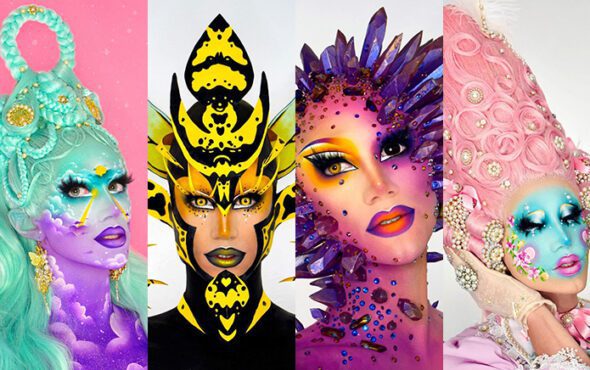 Speaking exclusively to GAY TIMES, Matt Perkins revealed what went into winning Painted with Raven and whether or not he’d ever do Drag Race as Crimsyn.

The show has seen Drag Race legend Raven search for the next makeup artist sensation as contestants compete from the comfort of their own homes.

Throughout the first season’s eight episodes, the cast was tasked with makeup challenges ranging from creating fake face tattoos to a look that will make the judges scream.

Painted with Raven is the first reality show to embrace the COVID-19 pandemic from start to finish, with most of the cast having never met in person given that the entire season was done virtually.

“I don’t know exactly how I feel because I only got the feeling of it being virtual,” Matt says of whether or not he wishes the show had been in person. “However, I am very into video games. So to me, I think during the second day of filming, it almost just completely turned into a video game to me because I would always sit in front of the computer, you know, typing away, doing stuff and it was like, I’m just playing this virtual computer game right now. This does not feel real.”

Matt tells GAY TIMES that seeing Raven and RuPaul live on his screen was so surreal that it felt like he was sometimes watching a TV show instead of competing in one.

The Virginia native continues: “I’m like, wait, am I watching TV? Are they real? Is this something just prerecorded that they’re just showing us? Like, I don’t know what’s happening!”

He adds that his nerves were “definitely eased” by getting to film the series from his home.

Matt says: “I have a feeling that if it was in person and I was around the cameras, I was around, you know, physically Raven and the guest judges in person – I think the nerves and the pressure would have hit me harder to where it would have like, it probably would have gotten in my head more and got really frustrated and stuff like that.”

Despite the virtual nature of the show, Matt tells GAY TIMES that he “definitely” still “made friends for life” as the cast still keep in touch via a group chat and are even planning to meet in person.

Although Matt has no regrets from the season, he does “wish” he “was fully myself off the bat”.

“I think towards the last two episodes, I started to really feel comfortable and dive into myself, but I really wish we saw it from the get go because my dad jokes are really funny and I believe I’m going to think differently,” he explains.

Painted with Raven detoured from the elimination format of Drag Race, instead using a weekly points system to determine a top two in the final episode.

Despite being happy that this meant “everyone had a shot towards the end,” Matt reveals to GAY TIMES that there was a moment that this format made him “so mad”.

He says: “I thought the points were fun until the end where I realised that the points really didn’t matter and I got so mad! [Laughs.]

“I was like, I was like, okay, we know we’re fighting for these points, yada yada yada. And then we get to the semi finale. And they’re like, ‘If you win this one, you double your points and everyone’s gets erased!’

“And I’m like, so I could have just not really done that well the whole time and then doubled my points at the end and been fine like, ugh!”

Aside from being a highly successful makeup artist, and now $25,000 richer thanks to his Painted with Raven win, Matt is also a hugely popular drag queen known as Crimsyn.

However, he opted to apply for Painted with Raven instead of Drag Race because what he does “lends itself more to the makeup world.”

“And then in terms of like experience with drag performances and all that stuff, I had only been performing for about a year-ish where, like part of that got cut off by COVID, so, you know, I think experience wise lends itself more towards the makeup world rather than, you know, on Drag Race,” Matt explains to GAY TIMES. “But that doesn’t mean I’m not, you know, still dipping my foot in the water of the Drag Race stuff! [Laughs.]”

Watch the finale of Painted with Raven exclusively on the streamer of all things drag, WOW Presents Plus. Subscribe by clicking here.