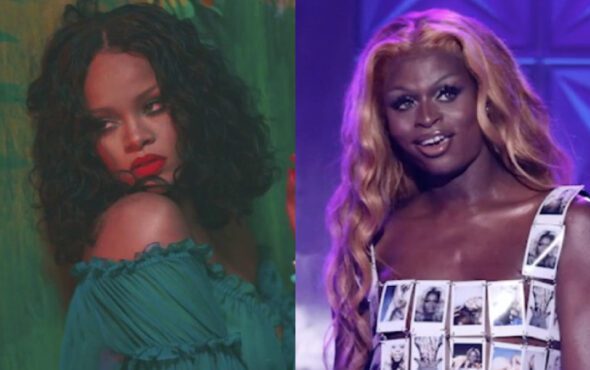 RuPaul’s Drag Race winner Symone has shared details of her interaction with pop superstar Rihanna at this year’s Met Gala.

In an interview with Entertainment Weekly, Symone spilled all the T about her attendance at this year’s star-studded event.

“The dress was 20 pounds because it was metal mesh, all individual chains,” the drag icon told the outlet of her stunning gold look. “It was a feat to put on and carry, but I’m the Ebony Enchantress, so I had to do it. Big, heavy dress for a stunning moment.”

At the ball, Symone had the pleasure of meeting icons such as Tom Daley and Whoopi Goldberg – as well as once again seeing the friendly face of one of the world’s biggest celebrities.

The drag icon has been linked to Rihanna several times before, something which started during season 13 when she revealed that the singer had been sending her direct messages on social media.

Symone shared that one of Rihanna’s messages read: “You soooo EVERYTHING!!!! Nasty lil b*tch! I live for every second of it! You’re a true joy to watch!”

She will soon be appearing in the star’s Savage X Fenty fashion show alongside Gottmik, but not before a friendly interaction with the S&M hitmaker at the Met Gala.

“I did,” Symone said when asked if she saw Rihanna. “I went over to her and I said, ‘Hello, hey diva!’ and she said, ‘They let you in? They let your ass in, huh?’ I said, ‘They sure did, they let me in, girl!’ She said, ‘Ok, turn around, you look good!’ She of course looked amazing; it was just two only girls talking to each other. The only girls in the world, darling!”

Rihanna has been a long-time Drag Race stan and has been known to send messages to some of her favourite queens.

Nina West, who was sent home from season 11 in sixth place, revealed that her controversial elimination caught the attention of the global superstar.

“Ending my night with a message from @rihanna – I am dead,” Nina wrote on Twitter. “Dead. Dead. I love you, RiRi.”

Nina didn’t spill the T on what Rihanna said to her, but we can only imagine it was filled with support and encouragement.

She also paid tribute to the iconic Vanessa Vanjie Mateo when she did a “Miss Vaaanjie” impersonation online.

The singer was on Instagram live when the season 10 and 11 queen wrote, “The lip is on! You look great,” which led to Rihanna chanting her now-iconic sashay line.

She then said: “You better come to the ball October 12, Mr Mugler in the back says so.”