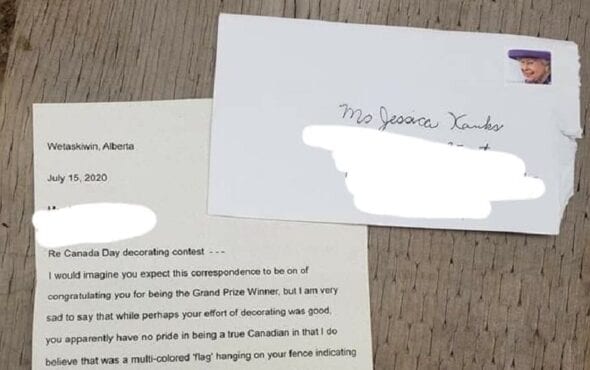 The sender claimed to have lived in the area for 50 years, and called LGBTQ+ people “sick”.

Jessica Hanks, a Canadian woman living in Wetaskiwin, Alberta, has received a homophobic letter after winning a grand prize for decoration. As part of her garden design, she flew the rainbow flag, to support her gay child, and this is what earned the letter sender’s disgust.

The letter claimed that Hanks couldn’t be a “true Canadian” because of her visible support for the LGBTQ+ community, even though Canada frequently ranks as one of the most LGBTQ+ inclusive countries in the world. “I would imagine you expect this correspondence to be on [sic] of congratulating you for being the grand prize winner,” the letter started.

“But I am very sad to say that while perhaps your effort of decorating was good, you apparently have no pride in being a true Canadian in that I do believe that was a multi-coloured ‘flag’ hanging on your fence indicating the ‘sick’ portion of our society.”

The letter goes on to say that LGBTQ+ visibility is something that adds to the apparent “horrific name” that the town carries, and that “junk” like the flag and “pride followers have no place in society and certainly not Wetaskiwin.”

The sender claims to have lived in the town for 50 years, and that the past eight to ten years have “degrade[d]” the town. The letter finishes by saying: “I sincerely hope and pray you were not one of those who painted the avenue-way by Norquest college. If you were, SHAME ON YOU!!”

Speaking to the Pipestone Flyer, Jessica spoke about the shock and sadness she felt from receiving the vile letter, saying: “I started crying. My daughter was standing beside me as I read it and my daughter is gay.”

She added that it felt like a “personal attack”, given her support for her gay daughter.

After posting a picture of the note on Facebook, Jessica was pleased to find that most of the residents were giving her support, instead of the hate-filled individual. “It was nice to see Wetaskiwin have my back,” she said.

She even received support from the town’s mayor, Tyler Gandam, who wrote: “If the person who wrote this, sees this post, please know that I was one of the people who proudly helped paint the Pride crosswalks on Main Street this year and last year.

“I’m proud of the City I live in and get to be the Mayor for. I hope that we continue to build inclusivity in our community. If you’re unhappy with how things are and need help finding a realtor, please let me know, I’ll be happy to help!”

Thankfully, the incident hasn’t put Jessica off from displaying her support, and later today (26 July), volunteers from the community, as well as people from the Sexual and Gender Awareness Wetaskiwin will be painting Jessica’s fence in rainbow colours. “I’m going to retaliate with even more love,” she said. “When you drive by my house next time the rainbow will be even bigger.”