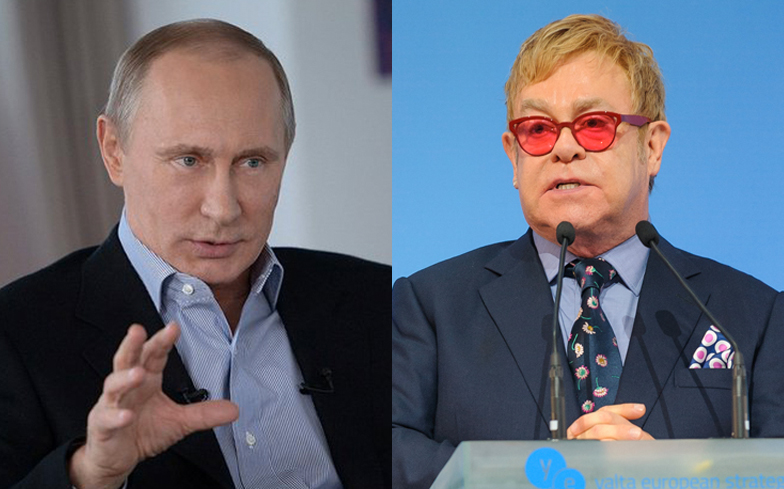 The singer hit out at the “hypocrisy” the Russian president showed.

Earlier this week, in an interview with the Financial Times, Russian president Vladimir Putin claimed that Russia has “no problems” with the LGBTQ community.

“God forbid, let them live as they wish,” said Putin. “Some things do appear excessive to us… They claim now that children can play five or six gender roles.”

He added: “Let everyone be happy, we have no problem with that. But this must not be allowed to overshadow the culture, traditions and traditional family values of millions of people making up the core population.

“I am not trying to insult anyone, because we have been condemned for our alleged homophobia as it is. But we have no problems with LGBT persons.”

Given how the LGBTQ community is treated in Russia, with an intersex woman being evicted from her home following police harassment and a BTS concert being cancelled for being ‘gay’ in this year alone, many took issue with what the Russian president said. Those included singer, Sir Elton John, who in a letter to Putin, wrote: “I was deeply upset when I read your recent interview in the Financial Times. I strongly disagree with your view that pursuing policies that embrace multicultural and sexual diversity are obsolete in our societies.

“I find duplicity in your comment that you want LGBT people to ‘be happy’ and that ‘we have no problem in that’.”

Making reference to the cutting of gay sex scenes and a picture of Elton John with his husband in the star’s biopic, he added: “Yet Russian distributors chose to heavily censor my film Rocketman by removing all references to my finding true happiness through my 25 year relationship with David and the raising of my two beautiful sons. This feels like hypocrisy to me.

“I am proud to live in a part of the world where our governments have evolved to recognise the universal human right to love whoever we want. And I’m truly grateful for the advancement in government policies that have allowed and legally supported my marriage to David. This has brought us both tremendous comfort and happiness.”

In a decision to censor Rocketman, Olga Lyubimova, the head of the Culture Ministry’s cinema department, told Tass that no specific restrictions were put on the film, but films had to abide by Russia’s laws on “paedophilia, ethnic and religious hatred and pornography.”

Speaking to CNN, Putin rejected Elton’s claims, saying: “Speaking of Elton John, I respect him very much … but I think he is mistaken. I didn’t overstate anything.

“We have a law that everybody is angry at us because of the law that doesn’t allow propaganda of homosexuals among underage population. Let’s let the kids grow and then let them decide what they want to do.”