Valkyrie returns in the electrifying new trailer for Thor: Love and Thunder 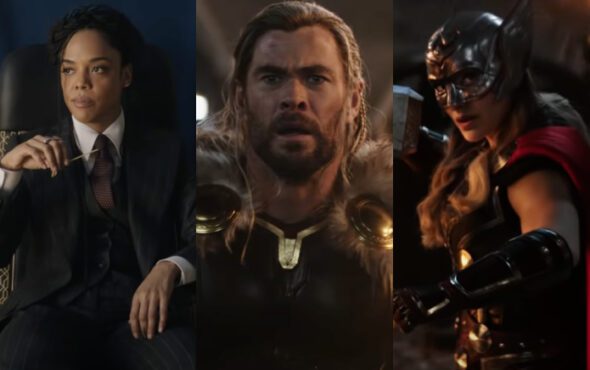 At the start of the teaser, the titular character (Chris Hemsworth) can be heard reflecting on his journey as an Asgardian hero.

“These hands were once used for battle. Now they’re but humble tools for peace,” he says. “I need to figure out exactly who I am.”

As the trailer progresses, new clips show the thunder god taking a more zen approach to life, which leads to him stating: “My superhero-ing days are over.”

The film is also set to feature other MCU characters, including the Guardians of the Galaxy and Thor’s former love interest Jane Foster as Mighty Thor (Natalie Portman).

But one of the best moments from the trailer was the first sneak peek of Tessa Thompson’s beloved queer character Valkyrie. In the short clip, the fierce warrior is seen in a modernised New Asgard.

Although not much is known about her exact role in the story, it has been confirmed that the film will explore Valkyrie’s sexuality.

During ComicCon in 2019, the Dear White People actress revealed that her character would be in search of a queen in the upcoming project.

“As new king, she needs to find her queen. So that will be the first order of business. She has some ideas. I’ll keep you posted,” she said.

Director Taika Waititi echoed similar sentiments when asked if Valkyrie would be “explicitly queer” during a 2020 interview with Variety.

Only time will tell if our new King of Asgard will finally find her queen in the film.

The trailer for Thor: Love and Thunder comes a few months after Thompson opened up about playing one of the MCU’s few LGBTQ+ superheroes.

When asked by The Wrap if she was excited to play the groundbreaking character, she replied: “It’s totally exciting.”

She added: “We talk so much about representation and obviously, in terms of the LGBTQIA community, there’s still so much work to be done.”

She then opened up about how she and Waititi have made an effort to shine a light on Valkyrie’s sexuality in the films.

“It’s hard because Taika and I would’ve even liked to go further, but in the context of the movies, there’s only so much we can do,” she revealed.

“Unfortunately, there’s not a lot of time invested in love stories in Marvel movies in general. I think that will be a little different on the new Thor, which is exciting.”

Thor: Love and Thunder is set to be released in theatres on 8 July.