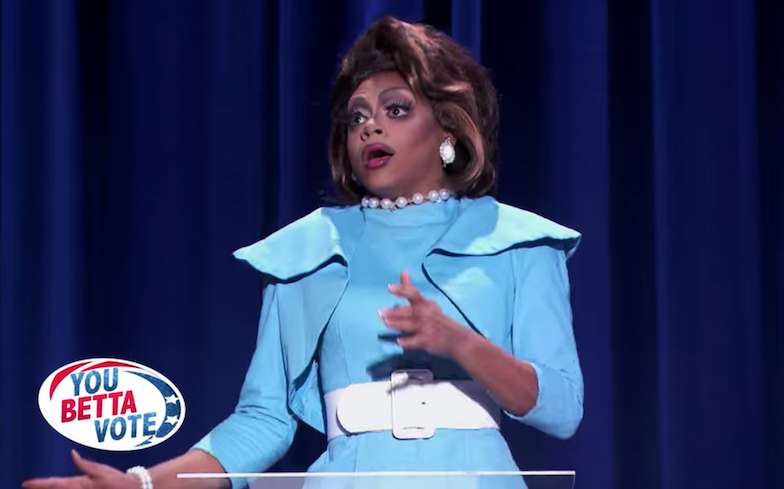 And none of them speculated whether injecting yourself with bleach was a good idea. Just a small hint, it’s not!

This week on Drag Race, the queens got all presidential as they took to the biggest debate in Drag Race HERstory for Choices 2020.

But first, they had to reprise a runway theme from All Stars 4 as they became cats to win the title of Miss Kitty Girl 2020. Thankfully, none of them were as nightmare-inducing as the recent film, and Jackie’s perrrrrsian pussy ultimately came out on top.

With Michelle Visage out of action, it was up to guest judges Rachel Bloom and Jeff Goldblum to host the debate, and the queens performed with mixed results.

Heidi was a joy to watch as always, but it felt liked she was relying on some old tricks when she whistled through her teeth like in her challenge-winning performance last week. She**y Pie also relied on her old lady shtick, even slightly bringing back her Katherine Hepburn impersonation.

Jackie provided some laughs with her Canadian candidate, although the judges quickly tired of this, and Gigi’s robot? character never really seemed to take off. Likewise, although Widow had a great ‘angry politician’ character, this didn’t translate into laughs.

The challenge was ruled by Jaida, standing on a platform of confusion, and her deflections were comedy gold. Quick, over there! Whether it was as legendary as Latrice Royale’s making peace moment back in Season 4’s debate, we’ll leave that up to you to decide.

On the runway, with a stars and stripes runway, Jaida slayed once again, but so did Jackie, as she made a powerful statement in her stars and stribes hijab. Sadly, the moment was mired when Jeff Goldblum questioned anti-LGBTQ and women beliefs with the garment, forcing Jackie to emotionally defend it.

“I’m here, and I deserve to be in America just as much as anyone else,” she said.

Fans were also not happy with Jeff’s comment, with one writing: “why tf did jeff goldblum think that was an appropriate thing to bring up.”

Another thing that fans weren’t happy about this week was Ru’s decision to put Jackie in the bottom two instead of Gigi, with many feeling that Gigi under-performed in the challenge.

“Jackie really did that!!!! stop sleeping on her, she deserves better,” wrote on fan, while another added: “Gigi being safe instead of Jackie??? Blasphemous is an understatement.”

But Jackie ended up SERVING in that lip-sync, even bringing tears to Jeff’s eyes, and was called safe, meaning that Widow had to sashay away. But with her message to Heidi, has Widow sowed the seeds for more drama?

Next week, the queens are making over Drag Race superfans, and sadly we aren’t involved, perhaps our invites were lost in the mail.. Star Wars star Daisy Ridley will also be guest-judging the girls.

And Season 12 wasn’t the only installment that Drag Race fans got last night, as the first episode of Celebrity Drag Race aired. You can get our thoughts on it here.