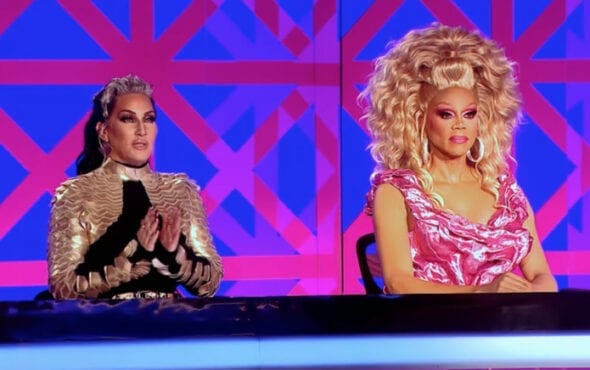 “You do NOT get to turn this into YOUR narrative.”

On the latest episode of the British spin-off, the Emmy-winning host criticised contestants Tia Kofi and Joe Black for their runway looks, telling them that he “came all the way across the pond” and expects “more” at this stage from their aesthetic.

“Is that asking for too much? I don’t think so. It’s the biggest stage for drag in the world. This is the Eurovision of drag,” he said, shortly after hitting out at Joe for her ensemble in the RuRuvision challenge, which was from… H&M.

The scene proved to be one of the most instantly iconic moments in herstory, with RuPaul’s “I don’t want to see any fucking H&M” line spawning countless memes on social media. H&M even got involved, sending Joe a cake with the words: “Roses are red, violets are blue, we loved your fit, don’t listen to Ru!”

However, there were some who took issue with RuPaul’s comments, with one viewer writing on Twitter: “Let’s applaud someone for being rude to people who can’t afford couture handmade gowns in a pandemic. Remember when Michelle and Ru were wearing haute couture in the 90’s…. oh wait.”

Sitting back and being read for filth isn’t part of Michelle Visage’s gig, so she swiftly stepped in and made several motherfucking points: “Hold up. This has NOTHING to do with money. At all. Ever. You do NOT get to turn this into YOUR narrative.”

T? Spilt. When another fan defended the comments, saying “it’s not about the price of the clothing, it’s what they do with it to make it special,” Michelle said this was “COMPLETELY” the point RuPaul was trying to make.

You can view the tweets below.

Hold up. This has NOTHING to do with money. At all. Ever. You do NOT get to turn this into YOUR narrative https://t.co/FnM0MliOPO

After delivering the aforementioned critiques to the contestants, RuPaul apologised for being “a little too hard” on them, saying: “It’s because I see so much potential in each of you. And if nothing else, these times have taught us to seize the day. Carpe diem, darling!”

She continued: “Look around you, look at the past winners, look at what you are doing right now and make it happen. Plus, Mama Ru was locked up in quarantine for two weeks, so that might have a little something to do with it…”

Speaking about the H&M debacle with GAY TIMES, Joe joked: “I don’t know whether a giant van full of pink velvet dresses may arrive, or if they want me to model the season’s collections, if I’ll have my own collaboration…

“Maybe I’ll be the new face of H&M, and what a face! Nothing quite says H&M like eyebrows halfway up your forehead. I can’t recall another time when that’s kind of happened. Something about that must’ve sparked something in Mr Charles.”

The fan-favourite performer added: “All of my Drag Race journey seems to be filled with controversy, which I quite like actually! It’s quite exciting for me.”