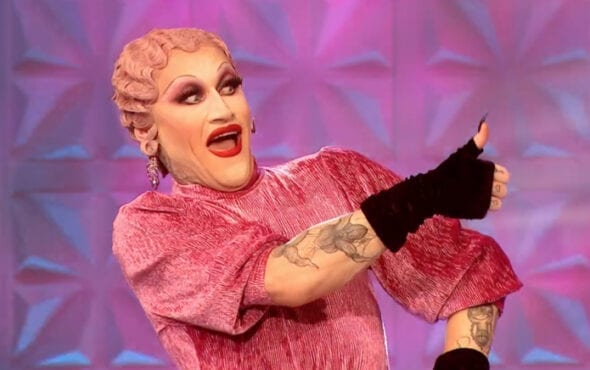 On last week’s episode of Drag Race UK, the star was at the centre of a high-street controversy when she bing bang bong’d, sing sang song’d and ding dang dong’d the maxi-challenge in an H&M dress.

“That outfit off the rack was a huge disappointment to me. That’s what everyday people do, and you should know that because you are a star,” Ru told Joe in one of her most shocking (and instantly iconic) outbursts to date.

“This goes to all of you up here: if it is from H&M then you better glitter the fuck out of it and make it something special. We’re looking for Great Britain’s Next Superstar, don’t waste my time. I don’t wanna see any fucking H&M.”

Following the episode, which spawned meme after meme, Joe received a “special” Valentine’s Day present from H&M. The delivery included flowers and a cake with the words: “Roses are red, violets are blue, we loved your fit, don’t listen to Ru!”

“I will be your Valentine!” responded Joe. “Thank you for the beautiful cake and roses. When this appeared at my door I… Yeah. Overwhelmed. Gorgeous.” RuPaul’s Drag Race: bringing queens and retailers together. We loves to see it.

Yes @hm – I will be your Valentine! Thank you for the beautiful cake and roses. When this appeared at my door I… yeah. Overwhelmed. Gorgeous ❤️ pic.twitter.com/ou9Fh6bCWq

Later in the episode, RuPaul apologised to the queens for her unexpected H&M critique.

“I want you to know that if I was little too hard on you earlier, it’s because I see so much potential in each of you. And if nothing else, these times have taught us to seize the day. Carpe diem, darling!” said the Emmy-winning host.

“Look around you, look at the past winners, look at what you are doing right now and make it happen. Plus, Mama Ru was locked up in quarantine for two weeks, so that might have a little something to do with it…”

Joe ended up sashaying away from the series for a second time after battling it out on the main stage with her Banana Drama sister, Tia, to the beat of The Communards’ classic version of Don’t Leave Me This Way. Speaking about the H&M debacle with GAY TIMES, Joe joked: “I don’t know whether a giant van full of pink velvet dresses may arrive, or if they want me to model the season’s collections, if I’ll have my own collaboration…

“Maybe I’ll be the new face of H&M, and what a face! Nothing quite says H&M like eyebrows halfway up your forehead.”

She added: “I can’t recall another time when that’s kind of happened. Something about that must’ve sparked something in Mr Charles.

“All of my Drag Race journey seems to be filled with controversy, which I quite like actually! It’s quite exciting for me.

“I’ve never felt like I fit in with the Drag Race brand, so the fact that I even got on it in the first place… It would’ve been a wasted opportunity if I had gone on there and done anything else but me.”

You can read Joe’s exit interview with GAY TIMES in full here.