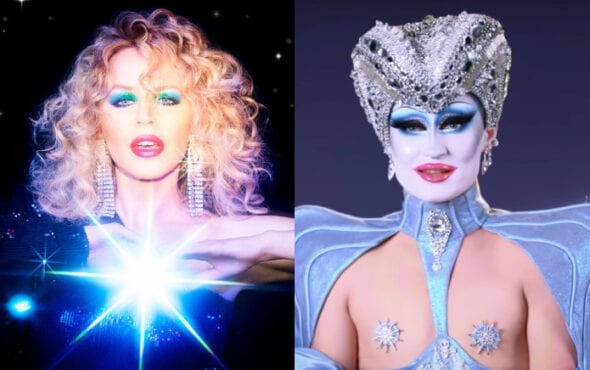 We don’t know who Kylie Minogue is rooting for on this season of RuPaul’s Drag Race (or if she’s watched it at all), but if we had to place a bet, it’d be on Gottmik.

Over the weekend, the beloved contestant paid tribute to the Aussie icon with a lip-syncing, choreo-heavy extravaganza to Where Does the DJ Go?, taken from her acclaimed new album, DISCO.

It follows the latest maxi-challenge on the 13th season of Drag Race, where the contestants funked it up in a disco-dancing documentary.

Although Gottmik didn’t win the challenge, she won – full stop – when the video earned the attention of Kylie herself. On her Twitter page, the legend quote-tweeted Gottmik’s post with the caption, “DISCO. QUEEN!”

Despite her status as one of the LGBTQ+ community’s most beloved and long-standing allies, Kylie is yet to follow in the footsteps of Ariana Grande, Christina Aguilera, Demi Lovato, Lady Gaga and Miley Cyrus on the judging panel.

When we spoke to Kylie for the current issue of GAY TIMES Magazine, we had to ask – WE JUST HAD TO – if she’ll ever sashay down that runway.

“It’s almost happened! It’s just been a scheduling thing. But trust me as soon as I can make it, I will be there,” she explained. “I know that filming in the UK had to be put on hold. I believe they’re [going to be] recording again.”

Kylie then joked: “I must remind them that I’m in town. If they’re prepared to give me a booster seat, I’ll be there!”

Gottmik made history for the Drag Race franchise this season as the first ever trans male contestant.

On this week’s episode, the 10 remaining competitors will flex their improv skills in a reboot of Ross Matthews’ critically-reviewed talk show, Bossy Rossy. TS Madison will join the panel.

You can watch the fierce trailer for the latest season of RuPaul’s Drag Race here or below.