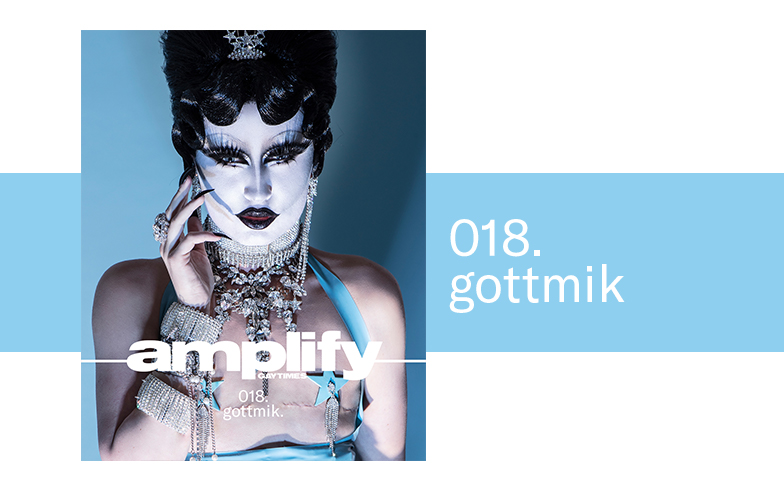 “Even though I knew I identified as a male, I always thought that I could suppress it because I loved feminine things and had feminine articulations, but when I realised that men can be feminine, it all clicked,” says acclaimed make-up artist and drag queen, Gottmik, who transitioned just weeks before our photoshoot.

The LA-based performer has become a prominent figure in the industry and queer community over the past few years, working with Drag Race icons such as Gia Gunn, Alaska Thunderfuck and Detox Icunt, all whilst racking up over 96k Instagram followers. They even painted the sickening mugs of Brazilian drag queen and singer-songwriter, Pabllo Vittar, and Club Kid slash model Amanda Lepore for our covers earlier this year.

But now, it’s time for Gottmik to share their story – one that’s not represented enough, or at all, in mainstream media – as a trans male drag queen, and to dispel any ignorant opinions on what it means to participate in the art-form.

“People cannot seem to understand how someone born female can identify as a man but still want to perform and artistically express themselves through femme drag,” Gottmik tells us. “In my opinion, a healthy soul/person needs a good balance of masculine and feminine energy to survive.” While we often hear about drag queens who identify as trans or non-binary, there’s a significant lack of attention on trans men who perform as women.

Gottmik speaks exclusively to GAY TIMES about coming to terms with their trans identity, wanting to be a visible role model for the community in this political climate and whether they’ve considered auditioning for Drag Race.

At what age did you come to terms with your trans identity?
I’ve known my whole life that something felt different. When I was a child, I only wanted the Happy Meal with the boy toy, and I only wanted to wear the boy uniform to school. Society told me I was just a tom-boy, but it wasn’t until I was 18 when I finally got the right group of friends around me that allowed me be myself and come to terms with the fact that I was transgender.

How have you found your transition?
Transitioning is hard. Thankfully I have the most amazing friends I could have ever asked for that make every step seem a bit easier. I’ve never been happier in my entire life and I’m so proud of where I am today.

How did your family react when you came out to them?
My family is very Christian, so they didn’t really understand. They went through so many emotions trying to deal with the loss of their daughter, basically, but when they came out to visit me recently, they saw how amazing the people around me are and how much happier I am that I’m living my life authentically. They realised that I’m finally “me”.

What reaction did you get from your fans when you first opened up about wanting to identify with he/him pronouns?
This is actually the first time I’m really talking about this online. My transition is still very new and with my family back home being Christian, I didn’t want to publicly say anything that could hurt or upset them, no matter how hard that was for me. But now I’m extremely proud and happy, I was hiding who I was for so long, and I never want to go back to that place.

How did you deal with coming out in an environment where your dead name is what you’re known as professionally? And how have you worked to make sure people refer to you by your proper name since?
Opening magazines that have my face and work in them with my dead name is such a weird thing. Luckily, I have amazing agents at Opus Beuaty – hi Charly and Jovita! – that were so cool about changing my portfolio to my preferred name, Kade, and starting to talk to clients for me as Kade. Weirdly, this is the one thing I’m not that good at. When someone calls me my dead name, my brain always just wants to ignore it so I don’t have to talk to some random person I barely know about my life story for  five minutes, but my friends have really helped me learn that it’s not only important for them. but for me to be correcting them and making sure I’m moving forward in this journey.

How do you hope to use your platform to inspire a generation of trans youth out there?
Me being so feminine held me back from acting on my transition for a long time. Even though I knew I identified as a male, I always thought that I could suppress it because I loved feminine things and had feminine articulations, but when I realise that men can be feminine, it all clicked. As of now, there aren’t a lot FTM drag queens so I felt kind of alone and invalidated. I hope that sharing my story and being more open will help other femme trans boys live their fantasy the way I’m living mine.

Has the current political climate in the US made you want to become a visible role model within the trans community, and wider LGBTQ community?
The political climate has definitely made me want to become more of a role model within the community. We see trans people getting murdered, and LGBTQ youth getting kicked out of their homes far too often. I’m so blessed to be friends with Gigi Gorgeous, Nats Getty, Huxch, Tiffany Namtu, and Hilary Montez, who all actively support GLAAD. Ariadne Getty, Nats and August’s mom, is a major supporter of GLAAD and just had the new LGBTQ youth centre built in Los Angeles. Every second I spend with them has made me understand what true love, acceptance and philanthropy is. This year I’m definitely looking forward to making them proud and do whatever I can to be a role model for kids going through the same thing I did. I want to be that person I wish I had when I was younger.

How would you describe your style of drag to those who are unfamiliar with you?
I would describe my drag as androgynous and loud. I love painting everything super black and white and clown-like with pops of crazy colours or crazy outfits that make an impression.

For you, what is the power in drag?
Drag is amazing because it’s whatever you want it to be. You can be a definition of drag pageant icon like Alyssa Edwards, a spooky glam monster like Sharon Needles, an androgynous angel like Milk, or a performance art masterpiece like Sasha Velour. Your drag is your art, you should channel your fears and your passions into the look and the stage. Drag is the most healing and all-inclusive art-form I could’ve ever asked to be part of and I’m beyond thankful for all the support I have!

Where do you get the inspiration from for your make-up designs?
I pull a lot of inspiration from clowns and old circus images on Pinterest, then I make them glamorous. I also pull inspiration from icons such as Pete Burns, Amanda Lepore, Mathu Anderson, Marlene Dietrich and so many more.

When did you first discover that make-up could allow to express yourself creatively?
I started expressing myself through drag when I was about 17-years-old because it was the only time people would think I was a man. People would just think I was a normal drag queen at the club and I… would… be… living! I wouldn’t even leave the house to go to a social setting without full drag on, but as soon as I became more comfortable out of drag, the need for Gottmik became less and less, and now it’s to a point where it’s solely my art.

What would you say to trans men/non-binary people who fear that drag could “demasculanize” them?
This is the one thing that I receive the most questions about. People cannot seem to understand how someone born female can identify as a man but still want to perform and artistically express themselves through femme drag. In my opinion, a healthy soul/person needs a good balance of masculine and feminine energy to survive. If your artistic outlet is drag, anyone who has anything to say just hasn’t been enlightened on the subject and is probably wishing they were brave enough to express themselves as honest and openly. Drag is hard, and being trans is even harder, so anyone who is doing both is extremely inspirational to me.

Do you hope to be the much-needed representation for trans men who do drag?
I definitely hope that me being open will help kids out there like me, because coming to terms with who I was was the hardest thing I have ever done. It took years of being depressed and angry until I finally had amazing people that supported me and accepted me before I even accepted myself. Having a femme FTM queen out there that I could’ve reached out to would’ve helped me more than I ever could’ve imagined.

Have you ever been approached to do/or have considered auditioning for Drag Race? If not, why?
I have auditioned before. Looking back I am so thankful I didn’t end up on the show at that time because I was still so lost and uncomfortable with who I was. I think I’m at a spot in my life where I’m becoming the person I have always wanted and I’m ready for a platform like that to take my activism to the next level. Whether it be Drag Race, Dragula, or just me opening up online more through videos and live streams! Whatever it is I’m definitely looking for new outlets to connect with everyone that supports me.

You’ve mentioned that this year is about activism for you – what are your goals?
My goal this year is to just be happy. Nats and Gigi changed my life by paying for my top surgery which was a major game changer for me. We all met up in San Francisco during Gigi’s birthday week to get my surgery and Nats, Gigi, Huxch, Tiffany, Hilary, Ariadne, and her partner Louie were all there helping me recover while celebrating Gigi’s birthday. It was the most amazing week of my entire life and I still wake up every day gagged that I have such amazing people surrounding me willing to help me to such an extent. These photos were taken about two weeks after the surgery so they look a bit raw and intense, but I thought it was important for me to capture that stage in this journey. I can’t wait to connect with more people going through the same thing this year, and continue to grow and explore gender and sexuality through art.