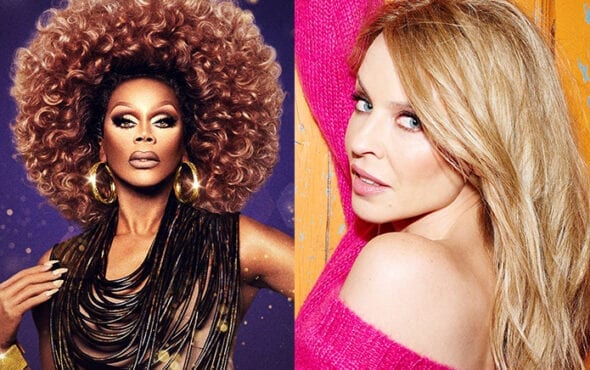 Considering her status as one of the LGBTQ+ community’s most beloved and long-standing allies, fans of RuPaul’s Drag Race have been eager to see Kylie Minogue take a seat at the judging panel for years now.

But with more than 21 series recorded across multiple different versions of the show, the Aussie pop icon has yet to appear alongside Ru and Michelle Visage on the hit TV phenomenon.

“It’s almost happened!” Kylie tells us for the current issue of GAY TIMES Magazine. “It’s just been a scheduling thing. But trust me as soon as I can make it, I will be there.

“I know that filming in the UK had to be put on hold. I believe they’re [going to be] recording again. I must remind them that I’m in town. If they’re prepared to give me a booster seat, I’ll be there!”

Drag Race UK producers, get on that phone stat!

It’ll come as little surprise that Kylie identifies her iconic Can’t Get You Out Of My Head look as the one she’s seen drag queens pay tribute to the most.

“It could also be Aphrodite,” she adds. “That gets a bit of love. I don’t know if gold hot pants are so much of a thing. I don’t think that’s quite enough for a drag queen.”

Kylie Minogue recently made history by becoming the first female artist to achieve No.1 albums in five consecutive decades in the UK. It came as her latest collection, DISCO, topped the UK chart.

Meanwhile, season 13 of RuPaul’s Drag Race will premiere on VH1 in the US on New Year’s Day.

The season will make major strides towards more authentic representation with the inclusion of former GAY TIMES cover star Gottmik, who makes history as the first ever trans male contestant.

The second season of RuPaul’s Drag Race UK will return with 12 new queens on 14 January on BBC iPlayer.

You can read the full cover story with Kylie Minogue in the new issue of GAY TIMES Magazine, which is in stores now and available on Apple News+.