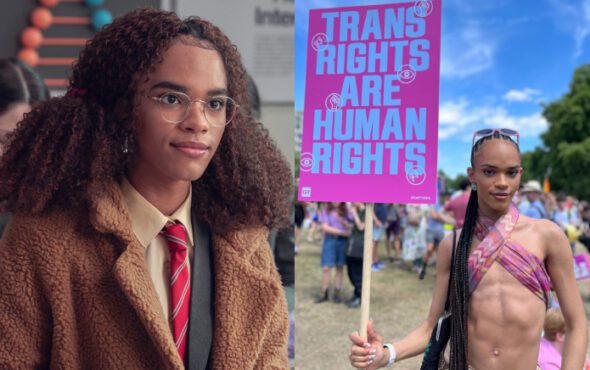 On 9 July, LGBTQ+ activists and allies took to the streets to celebrate and support the transgender community.

During the march, which started at Wellington Arch, thousands of attendees carried signs and shouted chants demanding for better healthcare and overall support for the trans community.

Joining the march alongside the bevvy LGBTQ+ activists was Finney. During the impactful event, the young star gave an inspiring speech that slammed the recent attacks on the trans community.

“I love you all so much. This is my first London Trans Pride. I feel so connected to my community more than ever, and if the government is trying to eradicate us… Like, we’re all here and we’re just duplicating – look at how many of us there are,” she said.

The 18-year-old then discussed her roles in Heartstopper and Doctor Who and their impact on trans inclusivity within media.

“Having this representation on screen has made me realise how impactful it is,” she explained.

“I want to thank you all so much for being here, and I hope… well, of course, the industry is changing because I’m here. “And how many of you have seen Doctor Who? Yeah, so that’s also a moment, and that’s also another show where my character is trans.”

Finney then called out the soon-to-be-former Prime Minister Boris Johnson and his transphobic viewpoints.

“So Boris, I hope you watch Heartstopper and Doctor Who because I exist, and I know you know I exist, we all exist,” she exclaimed amongst the cheerful crowd.

Towards the end of her speech, the beloved talent also shed a light on the historic trailblazers that paved the way for LGBTQ+ rights.

“And also to remember the ones that we passed, like Marsha P. Johnson, my mother, my icon, the legend. I hope we’re making you proud,” she said. Finney’s inspirational comments come a month after London Trans+ Pride organiser Lewis Burton spoke to GAY TIMES about the importance of the event and fighting for trans rights.

“We have to continue fighting to make it easier for our community and for future generations. That said, days like London Trans+ Pride make us feel so inspired and empowered. It’s truly magical to see so many of our community living loud and proud,” said Lewis.

“London Trans+ Pride feels like such an important ‘coming together’ for so many to be able to hold one another, and hold that space in the face of it all. To remember that it is worth it to fight for the right to exist, if not just for ourselves, for those who can’t.”