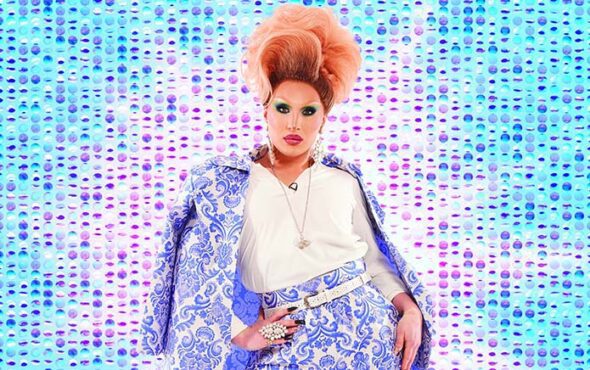 Speaking exclusively to GAY TIMES, The Vivienne spills the T on what we can expect from ITV2’s Karaoke Club: Drag Edition.

The brand new series is set to see a batch of the world’s biggest drag performers battle it out for the karaoke trophy in the Celebrity Karaoke Club spin-off.

All 12 performers taking part know a thing or two about delivering an iconic performance, but what happens when you mix drag with karaoke? “Mayhem,” The Vivienne says.

“Me and Trinity [the Tuck] were talking about this the other day, we can’t even remember the first two episodes because they gave us a free pouring bar with no limits,” the first-ever Drag Race UK winner reveals.

“I mean whoever signed off giving drag queens a free pouring bar needs their heads checking. It got messy but fun.”

Karaoke Club: Drag Edition will take a leap out of Drag Race: All Stars as the queens vote each other out of the competition.

All Star veterans Manila Luzon and Trinity the Tuck, who will appear on the show, know what this takes all too well – but for The Vivienne this brought new challenges to competing.

“It was hard because you’re only in there five minutes and you’ve already got to do a vote,” she tells GAY TIMES. “So it was hard kind of voting off just one performance.”

She continues: “It’s not face to face elimination, it’s done on a machine. Obviously you know you’re getting filmed, so you kind of are like ‘oh shit, I’m sorry’ and then just hit a name.

“We’d all had a few drinks and that made it easier, but it’s never nice having somebody else’s fate in your hands – unless you hate them of course and then you just send them home!”

When it came to who her vote went to, The Vivienne “very much based it on performance” to be as fair as possible.

“Were there alliances? Who knows,” she says before erupting into laughter.

The show will air on ITV2 at 10pm on 26 September before continuing nightly. Episodes will also be available to stream on ITV Hub.