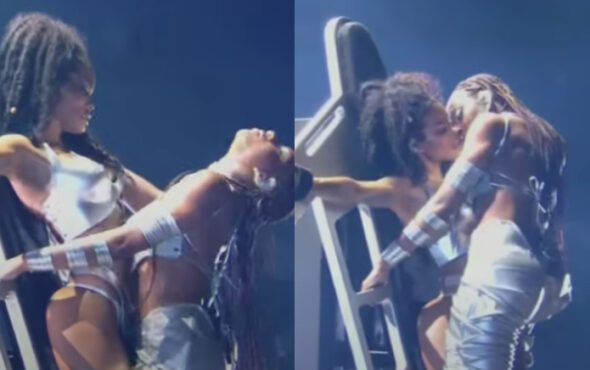 Normani gagged viewers at the 2021 MTV Video Music Awards when she gave Teyana Taylor a lap dance during a performance.

The Motivation star was announced as a performer at the VMAs just days before the 12 September ceremony in Brooklyn, New York.

Normani gave the debut performance of her new single Wild Side, which contains an interpolation of Aaliyah’s track One in a Million and features Cardi B.

Cardi was unable to attend the ceremony, so Normani brought out a special guest in her place instead.

She concluded her set with an homage to Would You Mind by Janet Jackson, during which Teyana appeared on stage tied up against a metal slate.

Normani proceeded to climb up the fixture and dance on Teyana, receiving a mixed reaction from viewers.

Some fans of the singer were gagged by what she served at the VMAs, with one writing on Twitter: “The best performance of the night and I don’t even need to see the rest. Y’all we really don’t deserve this type of slay from #Normani #VMAs.”

A second said: “Normani is hands down the best performance so far. Not trying to overwhelm the audience with gimmicks and flashy over-the-top everything. Giving such attention to detail and a truly polished controlled and artful performance. Such a great performer …that choreo #VMA #VMAs.”

However, some questioned whether or not the star was “queer bating” by choosing to lap dance on a woman.

One said: “So is Normani queer or just queer baiting at this point?”

Normani’s last VMAs performance was of Motivation in 2019, with the star previously appearing with Fifth Harmony in 2014 and 2017.

Her highly anticipated debut album is yet to be announced, but the reaction to her performance shows that the hype for it is alive and well.

Here’s how some fans reacted to the show:

is normani queer? if so slay, but if not wtf was the VMA performance-

HOW NORMANI SHOW UP BEST DRESSED THEN GAVE THE BEST PERFORMANCE! SHE IS AND WILL REMAIN THE MOMENT pic.twitter.com/inVJhhv1kG

i know my sister is singing live because she sang the chorus wrong (on her own song, smh @normani 🤦🏽‍♀️💀) after the second verse and there’s no sounds of a backtrack purrr ☝🏽😌 also those perfect note changes mhm yup exactly 💆🏽‍♀️ pic.twitter.com/NunlHHQ7K4

Normani had like one day to put this performance together and still managed to put together one of the best performances of the night WITH her mic in hand #VMAs pic.twitter.com/BZ74nWQmoi

why is normani queer baiting

before anyone tries to come for normani… “queer baiting” is only exploitative & harmful when men do it, when women do it it’s a commendable artistic choice

If I’m being honest, Ciara introducing Normani, This moment between her and Teyana, and the Aaliyah sample…

THIS WHOLE PERFORMANCE WAS A DEDICATION TO JANET. I LOVE IT! https://t.co/efjb2QegYi