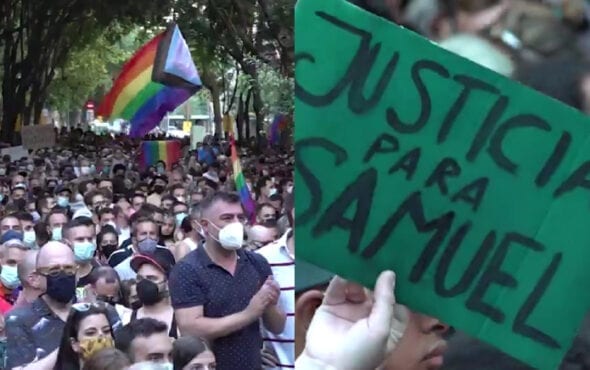 A petition has gained thousands of signatures to ensure Spain “never forgets” a man who died after being horrifically beaten in a suspected homophobic attack.

On Saturday (3 July), Samuel Luiz – a 24-year-old nursing student – was beaten to death outside a nightclub in the northern city of A Coruna, Galicia, in a suspected anti-gay hate crime. The attack began over a mobile phone, when the assailant and “two of his companions” believed Luiz was recording them.

Following the attack, Waves of people filled Madrid to show solidarity with the LGBTQ+ community and to protest the death of a man over the weekend.

Seven witnesses have reported Luiz was attacked by a group who fatally injured him after calling him a “fagg*t”, as reported by El Mundo newspaper.

A petition, which has over 49,000 signatures, has been launched to honour the 24-year-old and rename Avenida de Buenos Aires in Luiz’s name.

“To ensure respect, honour the memory and institutionally support the victim’s social legacy, it is proposed to the A Coruña City Council to rename the avenue where the young man was brutally murdered (Avenida de Buenos Aires) with the name of Samuel Luiz,” the appeal read. “The city of A Coruña does not forget you, Samuel. We want you on our street forever.”

Following protests of Luiz’s death, Spanish Prime Minister Pedro Sánchez said he “trusts” that police will find those behind Luiz’s murder and “establish the facts,” adding: “We will not take a step backward in rights and liberties. Spain will not tolerate it. All of my support for his family and loved ones.”