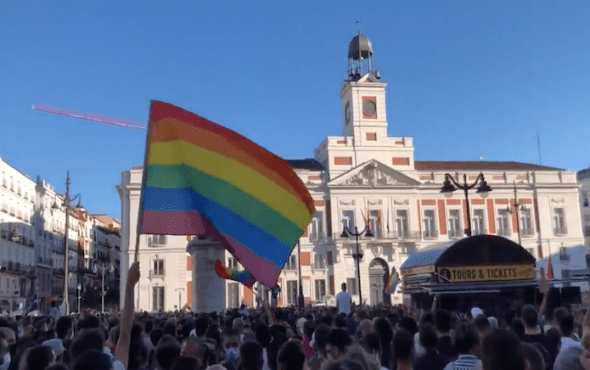 Outraged protesters have taken to the streets of Spain following a suspected fatal homophobic attack.

Waves of people filled Madrid to show solidarity with the LGBTQ+ community and to protest the death of a man over the weekend, Reuters reports.

24-year-old Samuel Luiz died over the weekend following an assault which many believe was an intentional homophobic attack.

Seven witnesses have reported Luiz was attacked by a group who fatally injured him after calling him a “fagg*t”, as reported by El Mundo newspaper.

Luiz was a young nurse who was killed in the early hours of Saturday in the northwestern city of A Coruna in Galicia.

Activists and protests joined together with signs and slogans protesting the mistreatment of the community and Samuel Luiz. “Their love is worth more than your violence,” a sign wrote, according to El Pais.

“I trust that the police investigation will soon find the authors of the killing of Samuel and establish the facts,” Sánchez posted on Twitter.

“We will not take a step backward in rights and liberties. Spain will not tolerate it. All of my support for his family and loved ones.”

However, tensions have risen after videos surfaced showing police attacking crowds at the protest shortly after Pride weekend.

Politician Mónica García has condemned the behaviour seen in videos. “We do not understand the disproportionality of the police action in these images after the concentration asking Justicia for Samuel,” she posted on Twitter.

José Miñones, the Government delegate in Galicia, has revealed an investigation is underway and that “nothing is being ruled out in the first phase of the investigation.”