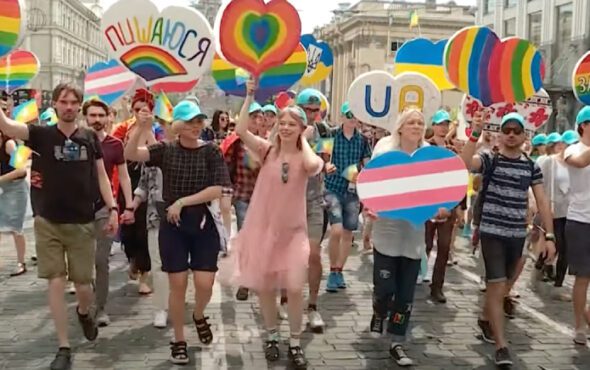 Members of Ukraine’s LGBTQ+ community are fearful of what the future may hold for them if Russia takes over the country.

For months, Western officials have reported that Russia has been planning an invasion of Ukraine that could begin at any moment – something Vladimir Putin has adamantly denied.

There have also been reports of explosions and artillery fire across the country, including around its capital city, Kyiv.

Some LGBTQ+ people living there told CBS News that Russia’s actions are “a direct threat” to their safety.

“That would mean a direct threat to me and especially, well, to me and to the person I love,” an 18-year-old law student named Iulia told the outlet.

She further explained that her goal is to use her law degree to fight for LGBTQ+ rights in Ukraine, where she is studying to be a lawyer.

“In Russia, LGBTQ people are persecuted,” Iulia added. “If we imagine that Russia occupies all of the Ukraine or just a big part of the country, they won’t allow us to exist peacefully and to fight for our rights as we are able to do that in Ukraine right now.”

The student also stated that it’s “much more safer than in Russia,” despite Ukraine not allowing gay marriage.

“We still have a lot of things to do about our rights and our freedoms, but in Ukraine, you can fully express yourself,” she said.

Russia has a long history of persecuting members of the LGBTQ+ community.

Just last year, it formally banned same-sex marriage – despite it not being permitted there to begin with.

In 2013, the country banned homosexual “propaganda” aimed at minors with a new law, something which eventually became grounds for banning Pride marches and the display of rainbow flags.

To all our supporters in the world: Call on your governments to stand up and to take action against the war in Ukraine! We need to stop it now, we need to show how powerful we are all together, and Putin will stand no chance!

“Ukraine is a European country,” explained Edward Reese, a project assistant for Kyiv Pride. “We have a 10-year history of Pride marches, and as you know, in Russia, the situation is like opposite.”

Reese also told CBS News: “We have totally different paths. … We see the changes in people’s thoughts about human rights, LGBTQ, feminism and so on. … So definitely we don’t want anything connected to Russia … and we won’t have them.”

The spokesperson said that members of the LGBTQ+ community have been preparing to help the Ukrainian army by offering first-aid courses to those who want them.

“We have fear, because it’s natural, but we don’t panic. We donate to the army. I know that like yesterday, the fund to support Ukrainian army, which is helping our army, has reached a maximum in its history for donations. And the Kyiv Pride also posted the call to donate, and I know that LGBT people did it. And I myself donated also for the medical battalions,” said the Kyiv Pride representative.

“We actually don’t believe that it will happen, but if it happens, I’m sure that many of the LGBTQ people and me, myself, we won’t flee the country and we will fight and destroy it.”