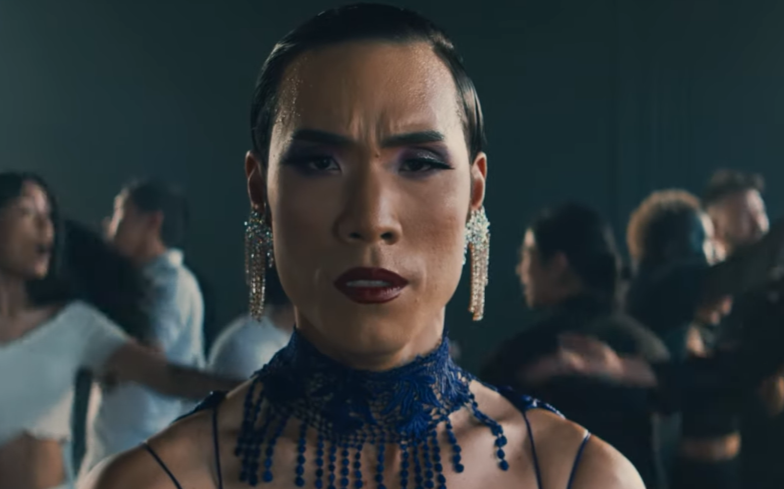 The YouTuber had previously come out as queer on National Coming Out Day.

The Try Guys star Eugene Lee Yang has come out as gay in a powerful dance video. The video is titled I’m Gay, and features no lyrics, but has music from ODESZA.

The video starts out in a scene familiar to many of us, as Eugene shares happy memories with his family. However, he begins to face rejection from them, including a slap, after he attempts to put on lipstick.

The next scene is in a church setting, where a preacher begins yelling. Things get better for Eugene as he dances with a female, before becoming attracted to a male dancer and sharing part of the routine with him.

Eugene is then seen performing in drag, alongside many other queens, including Drag Race stars Kim Chi and Mayhem Miller. However, a gunman then comes in, and Eugene is subsequently beaten by a mob and rejected by his family.

The final scene features Eugene staring into the camera as a mob argues behind him. The video ends with a dedication to the LGBTQIA+ community.

Alongside the video, Eugene Lee Yang posted a fundraiser for The Trevor Project, an LGBTQ organisation which focuses on suicide prevention for young LGBTQ people. At the time of writing, the fundraiser has raised over $44,000.

Posting about the video on Twitter, Eugene wrote: “I created this music video as my personal way of coming out as a proud gay man who has many unheard, specific stories to tell.

“I withheld because of fear and shame shaped by my background but I promise to give my full truth in the rest of my life’s work.”

I created this music video as my personal way of coming out as a proud gay man who has many unheard, specific stories to tell. I withheld because of fear and shame shaped by my background but I promise to give my full truth in the rest of my life's work.🏳️‍🌈https://t.co/bLTX7c4fwv pic.twitter.com/0nLLAWR5FC

He added: “Coming out is a lifelong process – your safety always comes first – but know that there’s a vibrant community waiting to welcome you with open arms.”

The YouTuber had previously spoken about his sexuality before, sharing his experiences with the Human Rights Campaign on National Coming Out Day last year.

Posting on their Twitter he said: “Growing up, I always felt insecure and self-conscious. I wrongly assumed that my otherness was a curse — that my Asian and queer identities would hold me back. Looking back, I know that was false.”

Eugene isn’t the only celebrity to come out this year, nor is he the first YouTuber. Earlier this year, Lilly Singh, also known as Superwoman, came out as bisexual.

Like Eugene, she made reference to her heritage, saying: “Female. Coloured. Bisexual.”

She added: “Throughout my life these have proven to be obstacles from time to time. But now I’m fully embracing them as my superpowers. No matter how many ‘boxes’ you check, I encourage you to do the same x.”

YouTuber Dan Howell also came out as gay earlier this week. “Queer people exist,” he said in a 45-minute video. “Choosing not to accept them is not an option. To anyone watching this that isn’t out, it’s OK. You’re OK. You were born this way. It’s right. And anyone that has a problem with it is wrong.

“Based on your circumstance you might not feel ready to tell people yet, or that it’s safe, and that’s fine too. Just know that living your truth with pride is the way to be happy. You are valid. It gets so much better. And the future is clear. It’s pretty queer.”