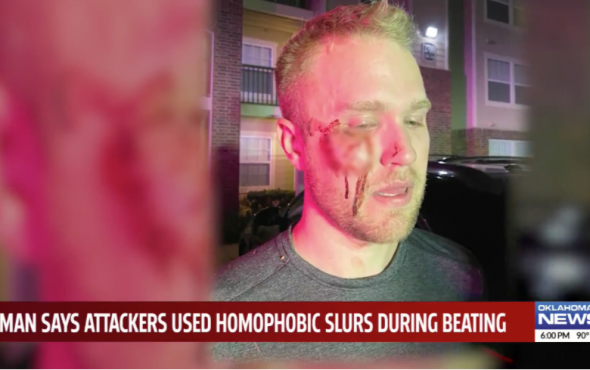 Two people have been arrested for the unprovoked assault.

Christian Council, a real estate agent for Keller Williams in Oklahoma, was savagely beaten in an unprovoked attack. A police report says that the attack happened after 2am on Saturday (28 June).

As Christian was preparing to go inside a house, an “extremely intoxicated” man and woman “aggressively approached” him and a male friend before yelling at and pushing him.

Christian said the man and woman, identified as Bennet Stone and Amery Dickerson, asked if he and the friend were a couple before using slurs against them. Speaking to local news station, KFOR, Christian says the attack “sure felt like a hate crime.”

He added: “It was clear that when they could tell my friend and I were gay, or that we appeared to be gay, they knew that they could do what they did to me.”

Christian attempted to fight back, but the assault didn’t end until his “arms fell to my sides and I was totally unconscious.”

Describing the attack, he said: “I’ll never forget the feeling of my neck snapping back and forth every time he would hit either side of my head.”

Stone and Dickerson stayed at the scene of the attack before officers arrived and face misdemeanor charges related to assault.

A GoFundMe page has been set up to cover Christian’s medical bills, and to help bring a civil case against the attackers. The page’s organiser, Jake Langford, wrote: “As a Realtor, Christian will need to cover his medical expenses and also take some time off from showings as he recovers.

“Christian also hopes to pursue a civil case against his attackers. Any help to cover his expenses would be greatly appreciated.”

Related: Dundee teen left “messed up by it all” after unprovoked homophobic attack