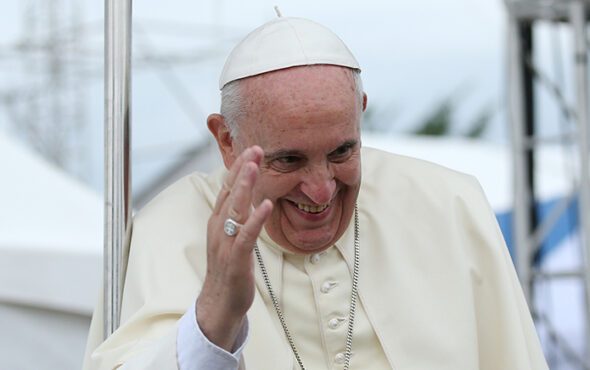 Pope Francis has stated that the most important thing LGBTQ+ people should know about God is that “he does not disown any of his children.”

In a handwritten response to a letter from Father James Martin SJ, which was sent on behalf of Outreach on 5 May, the Pope clarified some of the issues frequently raised by LGBTQ+ Catholics.

Although the Jesuit priest advised the head of the Catholic Church that his answers could be as long or short as he would like, what transpired was a ‘mini-interview’ – with the Pope answering just three days after the letter was sent.

“God is Father and he does not disown any of his children,” he said in response to being asked what the most important thing LGBTQ+ people should know about God is. “And ‘the style’ of God is ‘closeness, mercy and tenderness.’ Along this path you will find God.”

The 85-year-old advised LGBTQ+ people to “read the book of the Acts of the Apostles” as it is there that “they will find the image of the living church.”

Pope Francis also acknowledged the rejection many members of the community face because of religious beliefs when asked what he would say to LGBTQ+ people who have experienced this.

He explained: “I would have them recognise it not as ‘the rejection of the church,’ but instead of ‘people in the church.’

“A ‘selective’ church, one of ‘pure blood,’ is not Holy Mother Church, but rather a sect.”

Breaking: Pope Francis @Pontifex sends message to LGBTQ Catholics in mini-interview with Outreach, answering three brief questions often posed by LGBTQ Catholics: "A 'selective' church, one of 'pure blood,' is not Holy Mother Church, but rather a sect." https://t.co/ejjjDkrPaw

His words follow him previously telling gay, lesbian and bisexual people that they have the right to be accepted by their families.

Despite his comments, the Pope previously said that the Catholic Church cannot support same-sex marriage in the way it does with heterosexuals.

Instead, he explained that it can support secular civil union laws so that gay couples can have joint rights.

In 2021, the Vatican also banned priests from blessing same-sex marriages – though some clergy members have instead opted to bless unions.

You can read the Pope’s answers in full by clicking here.