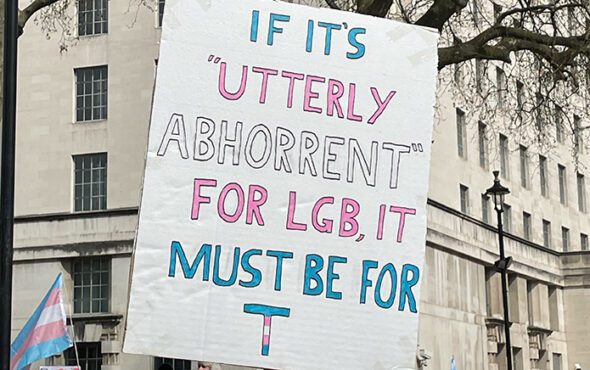 The petition calling for trans people to be protected in a ban on ‘conversion therapy’ in the UK is less than 14,000 signatures away from 150,000.

It is now the fourth most-signed open petition on the government’s official website.

It previously reached the 100,000 threshold required to be considered for parliamentary debate on 11 April.

The person who launched the petition, Sammantha Harris, told GAY TIMES that it “was born out of a frustration with how the current government is treating LGBTQ+ people and especially trans people.”

“I was expecting it to take weeks to get anywhere near the numbers it has now, and am moved by the solidarity the community has shown trans people,” she continued.

“Not just in signing the petition itself but how frequently it’s been shared, how many people have emailed their MPs over trans people being removed from the ban and the showing at the recent protest in London.”

Thousands demonstrated against the government’s decision to exclude trans people from a ban of the practice across from Downing Street on 10 April.

Many people held placards demanding that the government reconsider its stance, with those chanting sharing a similar sentiment.

The petition to #BanConversionTherapy for all is now the fourth most-signed open petition! ✊

This shows the incredible level of support that’s out there – so many of us want to see a full ban that protects all.

Sign below to add your voice to this plea!https://t.co/iit3V8eeS1

At 10,000 signatures, the government is obligated to issue a response to a petition.

The government’s website states that petitions with 100,000 signatures or more “are almost always debated.”

“But we may decide not to put a petition forward for debate if the issue has already been debated recently or there’s a debate scheduled for the near future,” it continues. “If that’s the case, we’ll tell you how you can find out more about parliamentary debates on the issue raised by your petition.”

Despite the petition having more than 136,000 signatures by the evening of 19 April, the government is yet to respond to it or confirm a date for debate.

There have been claims that the government has chosen to make transgender Conversion Therapy a wedge issue between itself and Labour. If so, this is in spite of the fact that most Tory voters (58%) want to see it bannedhttps://t.co/zAQb7yKygd pic.twitter.com/CO3xyXvbYu