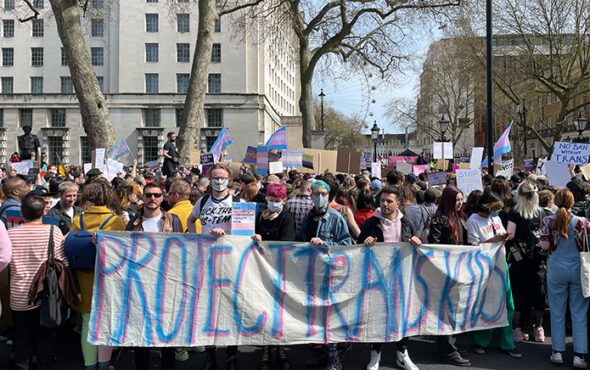 Parliament will consider a petition on including transgender people in a ‘conversion therapy’ ban for debate after it reached 100,000 signatures.

Support for the petition has skyrocketed over the last few days, finally reaching the threshold to be considered for a parliamentary discussion on 11 April.

The person who launched the petition, Sammantha Harris, condemned the “shameful” actions of the UK government.

“It’s shameful that the UK intends to deliberately exclude trans people from a ban in contrast to the approach taken by many countries, despite trans people being at a greater risk of experiencing the harmful & degrading practices,” Harris wrote in the petition’s description.

The Parliamentary petition to ensure trans people are protected in a ban has already surpassed 100,000 signatures in less than a week, and it keeps going!

But let's not stop there, keep sharing to show the huge public support for #BanConversionTherapy!https://t.co/1Jb663FPYM

At 10,000 signatures, the government is obligated to issue a response to a petition.

The government’s website states that petitions with 100,000 signatures or more “are almost always debated.”

“But we may decide not to put a petition forward for debate if the issue has already been debated recently or there’s a debate scheduled for the near future,” it continues. “If that’s the case, we’ll tell you how you can find out more about parliamentary debates on the issue raised by your petition.”

The threshold for debate being met came just a day after thousands of people protested the government’s U-turns on ‘conversion therapy’ legislation across from Downing Street.

Those at the event held placards and waved Pride flags in the air.