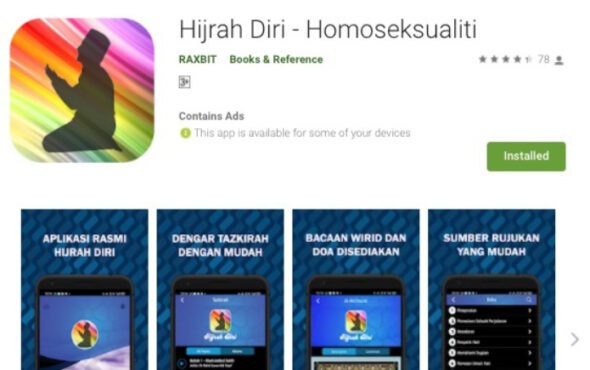 Malaysia’s government has promoted a ‘conversion therapy’ app which it said would help LGBTQ+ people “return to nature”.

The app, which is called Hijrah Diri – Homoseksualiti and was first released in July 2016, was tweeted about on 9 March by JAKIM, the country’s Department of Islamic Development.

“Hijrah Diri is an application of JAKIM’s initiative with Yayasan Ihtimam Malaysia to help the LGBT community return to nature,” the federal government agency wrote on Twitter.

“Currently only available in the Google Play Store.”

JAKIM provided more details of Hijrah Diri – Homoseksualiti in a follow up tweet, stating that it “contains an eBook that refers to the true experience of a gay man who migrated during Ramadan to abandon homosexual behaviour.”

The description of it on the Google Play Store stated that the app exists so that LGBTQ+ people can “overcome the problem of homosexuality” to “achieve real success in this world and the hereafter.”

“It is a common sense approach based on self-awareness, mental and behavioural [sic] changes with how to understand and appreciate the beauty and grace of God,” it continued.

It has now been removed from the Play store following fierce backlash to the app being freshly promoted by the country’s government, as the platform’s guidelines do not permit applications “that attempt to deceive users or enable dishonest behaviour including but not limited to apps which are determined to be functionally impossible.”

“Whenever an app is flagged to us, we investigate against our Play store policies and if violations are found we take appropriate action to maintain a trusted experience for all,” Google told The Guardian on 17 March.

As such, the app was unsurprisingly met with an overwhelmingly negative response online – with one person branding it as “despicable”.

“Leave the gays alone, disgusting waste of tax payers money for bs hatred, may this organisation be dismantled ASAP for the persecution of the LGBTQ,” someone else tweeted.

Another user added: “It’s funny because they could use the resources on other important matters but they wasted the money in creating an app that seems a lot gayer than any queer veterans.”

“I present to you JAKIM: the most useless funnel of our country’s resources,” a fourth said.

The UK government has promised a ban on ‘conversion therapy’ for some time, though is yet to implement one.

There is no place for the abhorrent practice of conversion therapy in our society.