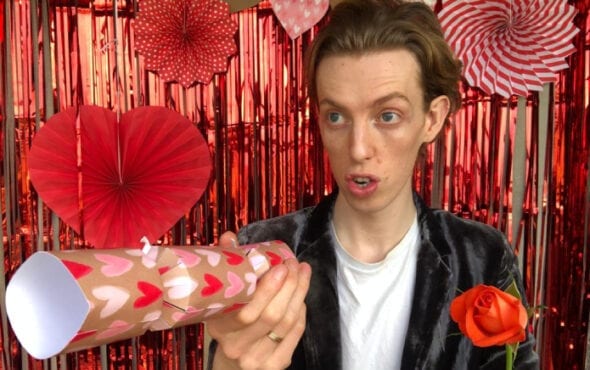 14 February 2021 is guaranteed to be a Valentine’s Day like no other.

Instead of venturing out to our favourite restaurants or donning our partay shoes for a night on the town, we’ll be inside, watching the telly and – yes, we can confirm this next part is true – eating.

This time of year, however, can be hard for LGBTQ+ people as it’s just another – we repeat, another – instance where queer romances aren’t represented in mainstream media.

So this Valentine’s Day, we’re hoping to inject some much-needed joy into the lives of our readers with three hilarious sketches from emerging comedian Harry Trevaldwyn and Tesco.

For those who are unaware of Harry and haven’t watched our first video (view here), the actor and writer is known for his original sketches for ITV and his character-focused comedy.

His sketch work has received critical acclaim and has been shortlisted for various awards. So yeah, keep an eye on this one.

In our second clip, Harry embraces his inner Nigella Lawson as he cooks a romantic home-cooked meal for his partner. Spoiler alert: it’s a bit of a mess. Let’s just say that Harry won’t be conquering The Great British Bake Off anytime soon…

Because he knows what’s good for him, Harry decides to indulge in a Tesco Finest Menu for Two, which includes a variety of different options such as the Scottish Salmon En Croute with Lemon Butter, Triple Cooked Chips, the Wicked Kitchen Chocolate Brownie Heart and some Pinot Grigio Blush. Our mouths? Watering. (Check out the full menu here).

Whether you’re single or stuck in lockdown with your significant other, this new comedy series is sure to remind you that romance is, in fact, not over: it’s just been isolating.