Date your flatmate this Valentine’s Day with Tesco 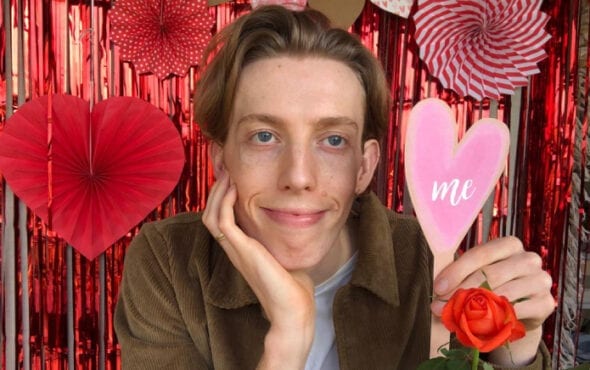 Whether you’re single or taken, 14 February will look the same for everyone: stuck inside and binging (insert streaming service of choice) here.

For LGBTQ+ people, this time of year can be a source of anxiety and frustration as it’s just one of many instances where queer love isn’t entirely represented.

To spread some humour and joy this Valentine’s Day, we’ve partnered with emerging comedian Harry Trevaldwyn – and Tesco – for three hilarious sketches, each of which showcase his signature deadpan sense of humour.

Harry, who’s also an actor and writer, has starred in various original sketches for ITV and is known for his character-focused comedy. So far, his sketch work has received widespread acclaim; having been shortlisted for several awards.

In his first clip with GAY TIMES and Tesco, Harry decides it’s time to woo his flatmate after spending three lockdowns together, while embracing his inner Fleabag to guide viewers on how to do the same. Sounds cute, huh? BREAKING NEWS: It’s a bit of a trainwreck.

The food, however, is gorge. Harry can be seen offering his flatmate various items from the Tesco Finest Valentine’s Day Menu for Two, which includes a variety of different options such as the Scottish Salmon En Croute with Lemon Butter, Triple Cooked Chips, the Wicked Kitchen Chocolate Brownie Heart and some Pinot Grigio Blush. Our mouths? Watering. (Check out the full menu – which includes vegan options – here).

Whether you’re single or stuck dining in lockdown with your significant other, this new comedy series is sure to remind you that romance is, in fact, not over: it has just been isolating.

The next episode will see Harry embracing his inner Nigella Lawson as he prepares a romantic (but very complicated) meal for his partner, before deciding to indulge in a Tesco Finest Menu for Two. When it’s only £15 for a starter, main, some veg, a side, a dessert and a drink*, do you blame him?

Watch Harry Trevaldwyn launch his bid for an Oscar nomination with his first Tesco partnership here or below.