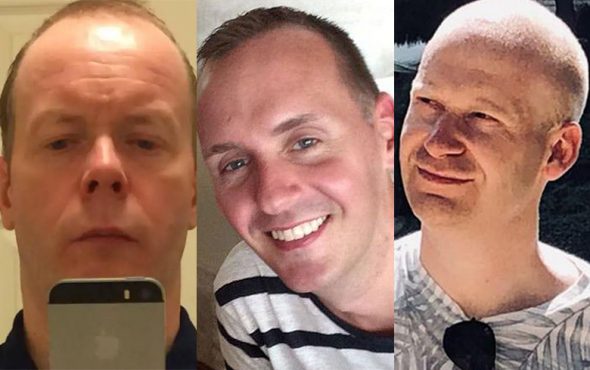 Tributes have poured in for the three members of the LGBTQ+ community who tragically lost their lives in the Reading terror attack.

On 20 June, David Wails, James Furlong and Joe Ritchie-Bennett were stabbed to death by a lone attacker at Reading’s Forbury Gardens. Three other people were injured but have since been discharged from hospital.

Wails was a 49-year-old scientist. His parents said he was a “kind and much loved son, brother and uncle who never hurt anyone in his life,” and were “broken-hearted at losing him and in such a terrible way.”

Wails’ employer described him as a “gentle, thoughtful man” who will be “much missed” by his co-workers.

Johnson Matthey, a global chemicals company, said in a statement: “We are devastated by the death of our colleague Dr Dave Wails. Dave was a highly valued and experienced member of the Johnson Matthey (JM) family.

“He had worked at JM since 2000 following the completion of his PhD at the University of York and several post-doctoral positions. He was an expert in catalysis and much of his career focused on using science for cleaner energy applications.”

Today we pay tribute to our colleague Dr Dave Wails, a highly valued and experienced member of the Johnson Matthey family. Our thoughts and sympathies are with Dave’s family and friends during this difficult time. He will be deeply missed by everyone at JM.

Mr Furlong, 36, was a teacher at The Holt School in Wokingham, where he served as head of history, government and politics. His parents Gary and Janet described him as “beautiful, intelligent, honest and fun”.

“He was the best son, brother, uncle and partner you could wish for,” they said. “We are thankful for the memories he gave us all. We will never forget him and he will live in our hearts forever.”

In an online book of tributes, a loved one called James “a proud gay man” who “wanted equality for all”.

Ritchie-Bennett, 39, originally hailed from Philadelphia in the United States, but had resided in the UK for the past 15 years, working in Reading at a pharmaceutical company.

His father, Robert Ritchie, called him “marvellous, loving and caring” and said he was able to bring people together “like a magnet”.

BBC Radio Berkshire presenter Sarah Walker, his close friend, described him as a “fantastic human being” who was “outrageously funny”.

Martin Cooper, the CEO of Reading Pride, paid tribute to the victims in a statement: “James, Joe, and David were true gentlemen. Each with their own unique personality. It is with deep sadness that I write this.

Martin Cooper pays tribute to the "character" Joe Ritchie-Bennett, who was killed during a knife attack in a Reading park.

He said all three victims were regulars at the Blagrave Arms, a Reading pub, and were a “support network for individuals” and that they will be “sorely missed by many” of the locals.

“Love unites, and we must rally together as a community. We must be there for each other,” he added.

Jamie Wake, Blagrave Arms spokesperson and a founding member of Reading Pride, said: “The LGBT+ community and our allies who live in Reading know the Blagrave as a safe space for so many members of our community, a place we have all been drawn to as we all unite together to mourn as one.

“There are many people inside and outside of Reading who may not have known these men personally, but will feel like they have lost members of their own community. To them I say you are a member of this family too and together we will work through this grief, together as one.”

The Prince of Wales, another favourite gay pub visited by all three men, also paid their condolences, calling them “truly beautiful souls who were very much loved by all.”

And more by The Blagrave Arms where the three victims were regulars. pic.twitter.com/WAjQZZOFTO

Stonewall UK paid tribute to Wails, Furlong and Ritchie-Bennett whilst urging the community to not let “Islamophobic, racist and xenophobic rhetoric be used to divide us. We must stand together to make progress.”

Over 100 people gathered to pay their respects to the victims outside the Blagrave Arms on Monday (22 June), and hundreds of students held a two-minute silence in Furlong’s memory at the gates of The Holt School.

The suspect in their murders, Mr Saadallah, was initially arrested on suspicion of murder, but was later re-arrested on Sunday (21 June) under Section 41 of the Terrorism Act 2000.

Under the Act, authorities have the power to detain him without charge for up to 14 days. It has not been revealed whether it was a homophobic attack or hate crime, but The Thames Valley police are urging media not to speculate about the case.

Our thoughts are with those affected by the attack in Reading on Saturday. It’s heartbreaking to hear two of the victims were LGBT. But we can’t let Islamophobic, racist and xenophobic rhetoric be used to divide us. We must stand together to make progress.

“I would ask both the media and the public again not to speculate on any aspect of this case at this time as this could have an impact on the ongoing investigation and any future court appearances,” said Detective Chief Superintendent Kath Barnes, Head of Counter Terrorism Policing South East.

“Counter Terrorism Policing have taken on the responsibility for this investigation and are keeping an open mind as to the motive for this attack.”