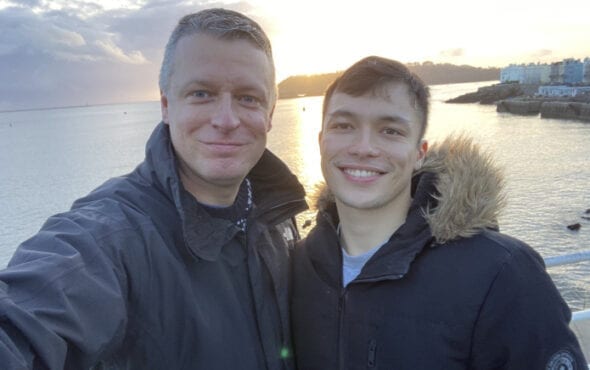 Labour MP Luke Pollard was inundated with homophobic comments over the weekend after sharing a selfie with his boyfriend.

The MP for Plymouth Sutton and Devonport posted an adorable photo of himself and his partner, Sydney, to celebrate Valentine’s Day.

Although the photo was met with thousands of likes from Pollard’s supporters, the anti-LGBTQ+ brigade came out in full force to criticise the “age gap” between them.

“F***ing dirty nonce,” said one disgusting user, while another felt the need to reply: “This is surely a wind up and it’s actually a father and son picture? The age gap has to be 30 years.”

According to Pollard, Sydney was also targeted by racists for his Chinese heritage.

However, hundreds came to Pollard’s defence to celebrate their love as two consenting adults, while highlighting the lack of criticism afforded to their straight counterparts when it comes to the “age gap” debate.

“Is there no end to the hypocrisy and double standards of the Tory party and its followers? They’re all out trolling Luke for having a “younger” boyfriend and yet Boris Johnson is literally 56, and Carrie Simmonds is 32, that’s a 24 year age gap,” said one supporter.

Another tweeted: “The abuse the pair of them are getting from trolls for the age gap is utterly disgraceful. If Luke was straight and his partner was a woman, no one would bat an eyelid.”

In an interview with PlymouthLive, Pollard said he simply wanted to share a photo with his partner for Valentine’s Day, just like other couples.

“Me sharing a picture of me and Sydney going on a walk with Plymouth Sound in the background, it’s no different to any of my friends’ pictures. It’s exactly the same thing [but we just happen to be gay],” he explained.

“When you’re in the public eye, there will always be people who jump on you. But there’s simply no place for this homophobic or racist comments.

“I feel very sorry for the people who led the attacks, they must be pretty lonely if seeing other people happy is a threat to them.”

While he’s more than happy to fulfil his role as an MP by being as approachable as possible towards his audience, taking their comments and queries on board, Pollard said he won’t condone homophobia or discrimination of any kind.

“We need to learn how to disagree with people without being disagreeable – but being LGBT+ is not up for debate. We exist, we are not up for debate. It’s important when you’re in the public eye to stand up for what’s right,” he explained.

“If two consenting adults fall in love with each other, it shouldn’t matter what they are. Love is love. It’s important to show that love trumps hate.”