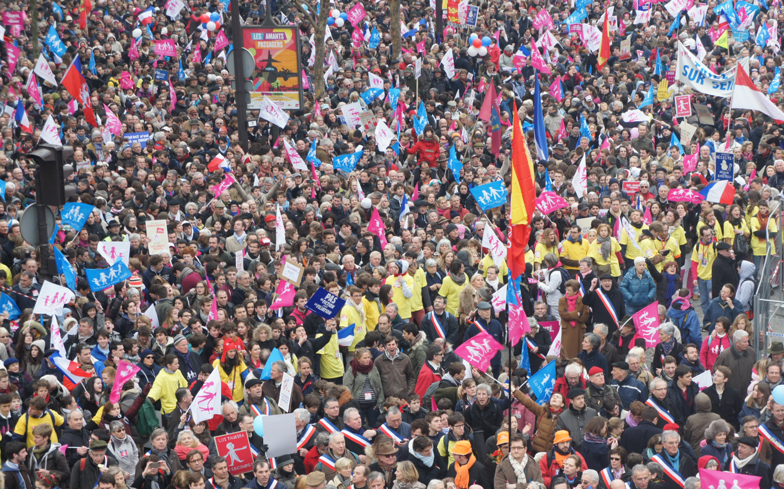 A similar La Manif Pour Tous protest from 2013 via Flickr

Similar protests happened after same-sex marriage was legalised in France.

Up to thousands of protesters are descending onto the streets of Paris to argue against a new law that would allow lesbians and single women access to IVF treatment.

The law, which passed France’s lower house last month, is the first social reform law in the country since same-sex marriage was legalised.

The current laws force lesbians and single women to go abroad if they wish to have the treatment, and some French courts have refused to allow the second woman in a same-sex couple to have maternal rights to the child.

The proposed law would cover the medical costs for all women under the age of 43, and would also allow children conceived in this manner to find out the identity of the man who donated the sperm when they turn 18.

AFP reports that organisers are hoping for around 100,000 people to show up to the protest. When France passed same-sex marriage laws in 2013, around 340,000 people took to the streets to protest against the legislation.

The protesters are expected to be mainly right-wing, as well as conservative Roman Catholics and other conservatives from different faiths. Organisers have booked out 100 buses and two high-speed TGV trains to bring in protesters from all around the country.

Opponents claim the law deprives children of a paternal figure, threatens the family structure, and could allow surrogacy for gay men.

Pascale Moriniere, the president of the Association of Catholic Families told AFP: “It’s not going to be derisory. It will probably be comparable to the first protest (against gay marriage) in 2012, with around 100,000 people.”

Yann Raison de Cleuziou, a sociologist, felt that the protest was only being held as a message, rather than trying to change the policy. “The people demonstrating will be doing it more out of moral conviction, a sense of duty, rather than to try to make the government back down,” he said.

Associated Press reports that LGBTQ activists and left-wing groups have organised a counter-protest. It’s also reported that the police have blocked off several streets in Paris to prevent violence.