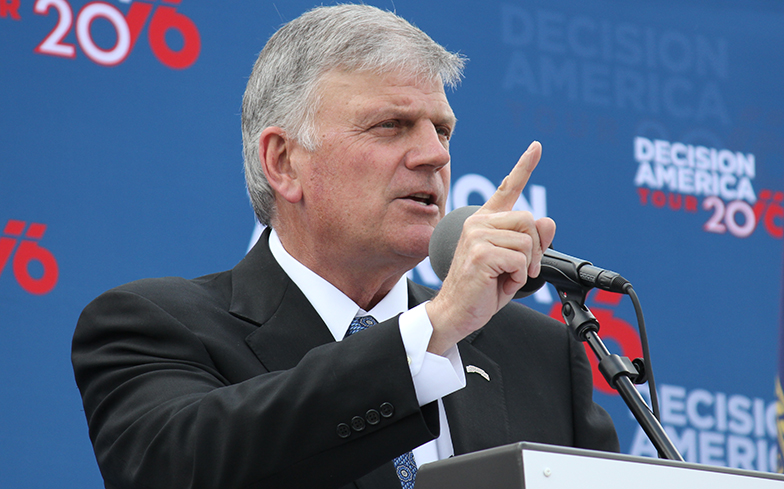 The staff at his field hospital have to oppose same-sex marriage.

Amid the coronavirus pandemic, conservative preacher Franklin Graham opened up a field hospital to help treat patients. Ordinarily, this would be something to be praised, but it transpired that he would only employ people to staff the hospital if they opposed same-sex marriage.

As we all know, you can only give someone proper medical assistance if you oppose certain people’s right to marry. Sigh…

He claimed that critics of his hospital were “tone-deaf” over the main issues, highlighting Democratic politicians who opposed his views, as well as the New York City Commission on Human Rights and the Reclaim Pride Coalition.

In a Facebook post, he wrote: “While our Scriptural belief in marriage between a man and a woman seems particularly offensive to representatives of these three groups, we don’t believe this is the time or place to wage this debate.

“It seems tone-deaf to be attacking our religious conviction about marriage at the very moment thousands of New Yorkers are fighting for their lives and dozens of Samaritan’s Purse workers are placing their lives at risk to provide critical medical care.”

He added: “If any of these [opposing] groups had funded and erected their own emergency field hospitals to serve COVID-19 patients in Central Park, we would join what we believe would be most New Yorkers – and Americans – in applauding and praying for them, not harassing them.”

This is hardly Franklin’s first foray into the world of homophobia, as he accused former presidential candidate Pete Buttigieg of “flaunting” his homosexuality, as well as dismissing the idea that someone could be LGBTQ and Christian.

“God’s Word defines homosexuality as sin, something to be repentant of, not something to be flaunted, praised, or politicized. The Bible defines marriage as between a man and a woman – not two men, not two women,” Franklin wrote.

And he also launched an attack on Taylor Swift after she supported the Equality Act, a bill which would prevent discrimination against LGBTQ people.

“Shame on Taylor Swift for using her platform to try to push the socialist left’s so-called Equality Act, which has nothing to do with equality, but is about pushing the LGBTQ agenda down the throats of the American people,” he wrote.

“When she received an award for her LGBTQ pride-themed music video at the MTV awards last night, she did a pitch for the Equality Act. This bill is the most crushing threat to religious liberty in our nation’s history.”