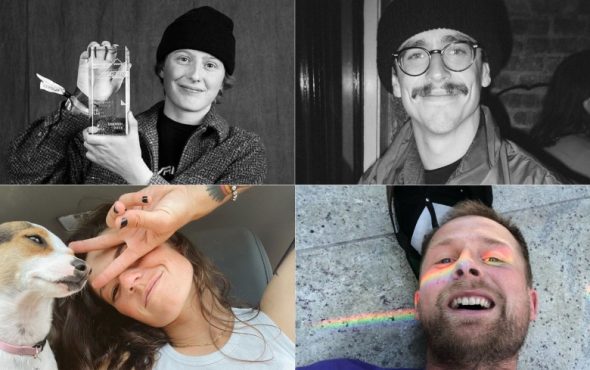 The snowboarders follow in the steps of Tanner Pendelton who came out last week.

Last week, snowboarder and filmmaker Tanner Pendelton came out as gay during an interview with Torment. And now, four other snowboarders: Kennedi Deck, Chad Unger, Jill Perkins and Jake Kuzyk have all come out as members of the LGBTQ+ community in interviews with Torment.

In her Torment interview, Kennedi said: “I knew I was gay when I was 13. I never really knew anything about gay people, and I sort of just thought everyone liked everyone. I was mistaken.

“The first person I ever told was my childhood best friend. Swinging on the swing at our elementary school I blurted out the words, ‘I’M GAY.’ To my surprise, he didn’t care at all. He even thought it was cool, ‘cause we had one more thing in common: girls.”

Although when she was 16, Kennedi tried to be in relationships with boys, it wasn’t until she started snowboarding and had a queer woman as her coach, that she began to realise it was okay to be gay.

Kennedi also said that her parents struggled with her sexuality, believing it to be a phase, but they eventually came to accept her. She then called for more “intersectional representation” in the snowboarding community to help LGBTQ+ people feel accepted within the sport.

She added: “I want to encourage people to start by talking. Ask someone what their pronouns are, ask someone about their partner, or just make an effort to make it clear that you’re an ally rather than sitting on the sidelines in silence. At the very least, buy a damn t-shirt so when you are wearing it we can tell that you are down!”

In an Instagram post, Kennedi praised the other snowboarders who came out, writing: “So proud of all my friends for sharing their stories this week with @torment_mag its not always easy to have these conversations hopefully after this week that changes. If anyone wants to reach out for support or to continue conversations please do.”

In Chad’s interview, his friend, Spencer Schubert, wrote: “Chad was openly out before, but it wasn’t well known, because few had dug deep enough to ask.

“Maybe that’s because his snowboard friends hadn’t taken the time to see the world as he does, to take a step back from the banter and bullshit to observe.

“Knowing that Chad is gay doesn’t change my thoughts on him in the slightest, but it does make me question myself and my peers. Would he have said something sooner if snowboarders were more open? Most pros project themselves as progressive on issues like the environment, but are we as progressive with sexuality?”

As Chad is deaf, he did his interview in a video format in sign language. You can watch the video here or below.

In her interview with Torment, Jill Perkins didn’t put a label on her sexuality, saying: “My sexuality falls short of a definition. It’s not one way or the other. I enjoy getting to know and love people.

“What I will say is about three years ago I fell in love with a girl. I guess, before that, I never really admitted to myself or thought about being gay or straight or in between. That’s really it. But here I am, three years later, realizing this was not just as some would say, a phase.”

Although she hadn’t struggled with her sexuality, she admitted to not having “embraced” it beforehand, saying: “I feel like I just recently started to accept myself and my feelings. I wasn’t necessarily fighting them; I just never fully embraced them.

“That being said, it took time for sure. But that’s important. Nobody should feel forced into situations or feel like they need to express themselves in ways they aren’t ready to.”

In his Torment interview, Jake credited Tanner’s coming out as giving him the confidence to come out. Jake had confided in friends and family about his sexuality about one year ago.

One of those people was Tanner, and after Jake had come out, he said they “moved to an empty part of the park and talked for hours. We could relate on so many levels right away. It was this huge release.”

Reflecting on the difficulties he faced in admitting his sexuality, he said: “It seemed so difficult to be openly gay and have this career, these friends, and all the interests that came along with that. I felt like if I started to show this part of myself—that becomes really scary because you just don’t know what’s gonna happen.

“When you’re alone thinking about this shit all the time, you develop really wild ideas of what it might look like and what could happen. My career has always moved in this positive forward direction. So I was afraid to risk damaging that. I didn’t want to sacrifice what I already had.” “And to finally open up about it. An interview with @marty_mcstark @tannerpendleton and @ian_boll is now up on the @torment_mag website.

“The chance to share my personal story alongside a really special group of queer people in snowboarding feels perfect. I really hope that this can help push for further acceptance and understanding in our community for LGBTQ+ and all other folks who feel marginalized in this world.

“To build some space for those who need it. There are many who do. With everything going on right now, it doesn’t feel like the time to be talking about myself.

“But I know this conversation is important. And it feels like there’s a shift happening. People are really listening. And trying to be better. I hope that this does not distract attention away from the civil unrest and extreme social injustices that the BIPoC community has faced for a very long time.

“I’ve reconciled with my privilege and how that affects the people in society who are different then me. We think by being a good person it’s enough. But a place needs to be made for those who are on the outside. Just being ‘fine’ with someone’s existence is not enough.

“If you have learned acceptance for me through my story. I ask you to find that same acceptance for all people in the lgbtq+ community and beyond. No matter who they are or what they look like. Happy Pride.”