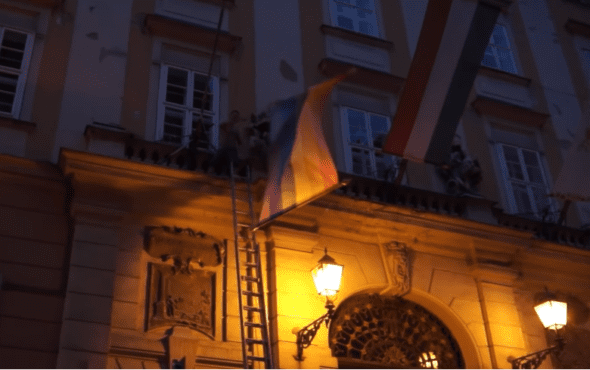 Előd Novák was arrested after tearing down and binning a Pride flag.

Előd Novák, a former Hungarian MP involved with far-right politics, has been arrested after he tore down a Pride flag from the Budapest City Hall building and threw it in a bin. Novák is the vice-president of the far-right group, Our Homeland Movement.

Novák used to be an MP for the far-right Jobbik Party, but Remix reports that he left the party after they began attempting to disassociate themselves with their far-right image in order to attract more voters.

The Pride flag was on the building to mark what would’ve been Pride celebrations in the city, had they not been cancelled due to the ongoing coronavirus pandemic.

In a video uploaded by the group, Novák scaled the building with a ladder, tore down the Pride flag, and then proceeded to throw it in a bin. Others with him prevented security for the building intervening as he climbs.

Local sanitary workers removed the flag from the bin, but Novák stole it from them, before throwing it in a different bin. When he arrived back to the initial scene, he was arrested and charged with vandalism.

In a statement, the group claimed the flag was “LGBTQP propaganda”, and that “this anti-family symbol has no place on the street, especially on the facade of the capital’s local government.”

Like Poland, homophobia is becoming more widespread in the Eastern European country, partially enabled by its Prime Minister, Viktor Orbán.

Recently, activists said that the country’s new laws surrounding trans people would push the country “back towards the dark ages”.

The new law, which was voted through the legislation by 134 to 56, defines gender as based on chromosomes at birth, and takes away the right of trans people to alter their gender and name on official documents.

This is not only damaging for the mental health and wellbeing of trans individuals, but could also be a risk to their safety as they can no longer choose a name that fits with their identified gender, a factor which could lead to them being regularly outed in their daily life.

The country also pulled out of Eurovision Song Competition, with speculation believing that is what due to the competition being viewed as “too gay.” Andras Bencik, TV commentator and editor of a pro-government magazine, called Eurovision a “homosexual flotilla” and suggested that the country’s mental health would be improved by bowing out of the competition.

They also banned a Coca-Cola advert which featured same-sex couples, claiming that they were “detrimental” to the mental development of children.