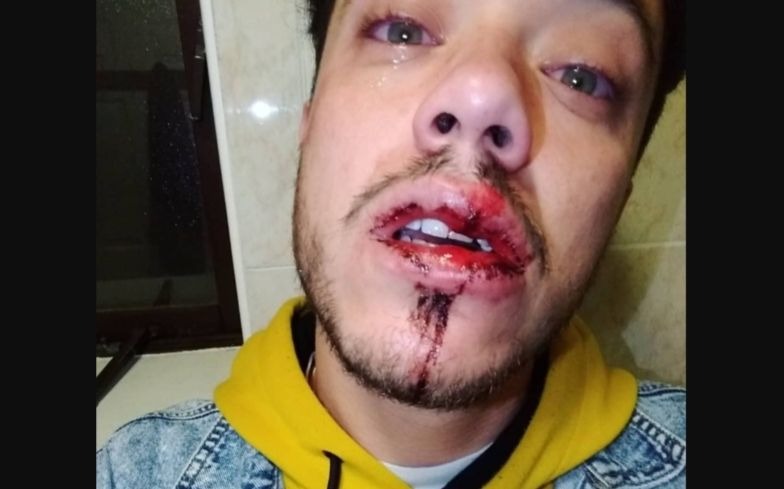 The attack took place outside the victim’s apartment at 3:30 in the morning.

A vicious gang, reportedly led by two girls, have attacked a gay man outside of his Dublin apartment after witnessing him kiss his boyfriend.

Danilo Matta had returned home with his boyfriend after a night out with friends. The Brazilian national kissed his boyfriend, who had his bike outside his apartment, before his boyfriend left.

Speaking to Dublin Live, Danilo said the gang approached him after this. “I live above a pub in North Dublin,” he said. “My boyfriend had left his bike tied there and we kissed and he cycled away.

“Once he was out of sight, the gang approached and said ‘what’s going on here?’, speaking about the kiss they had just witnessed. There were two girls and four men and two of the men were on bikes.

“At this stage, I start to feel uneasy but before I can even respond, they hit me in the mouth with a steel bar.

“After this hit, I became dazed and confused and couldn’t understand what had just happened. They hit me for a second time in the mouth and after that I grabbed my keys in my pocket and ran to the door for my apartment.”

Danilo said that after the gang realised they were outside his apartment they fled in opposite directions. He reported the crime to the police the next day, due to the gardai not arriving when he called them. He also had an ambulance come out to look him over, but he rejected hospital treatment.

Posting on Facebook, Danilo wrote: “We always show the good part of our lives on social media. But, I think that’s really important to talk and to show some of the bad things that happen to us sometimes.

“I was assault, attacked by knackers last friday night. They were 5 or 6. I remember seeing at least 2 girls in the group. Two of them were with bikes. They had hit me with bars, I can’t remember how many times, without any reason. They didn’t take my wallet or cellphone. Homophobia? Xenophobia? Maybe, much probably.

“It is important to know that this kind of things are happening around us. I wasn’t the first one and unfortunately I won’t be the last one. Thank God I could run and thank God I’m ok and safe right now.

“I wanna thank you all people. Thank you for your support. We are stronger together. Let’s keep being the goodness of this world and being light everywhere.”

Related: Gay man and brother attacked in a “bloodthirsty” homophobic attack in Australia