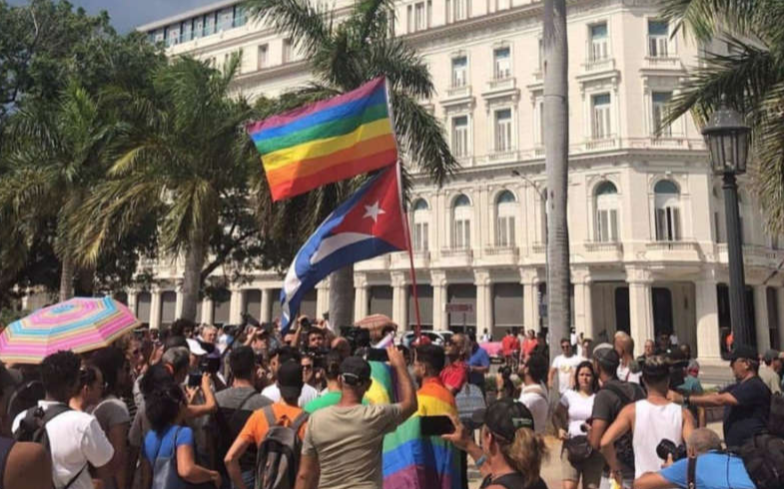 An official march was cancelled by Cuba’s National Center for Sex Education on Monday (May 6).

Around 100 LGBTQ activists in Cuba held an impromptu Pride march after an official one was cancelled earlier this week. Marchers carried rainbow flags and chanted “Long live a diverse Cuba.”

The march lasted for around half a mile before marchers were stopped by security forces. Around three people on the march were arrested, while others were ordered to disperse.

The reason that march was held was because the official conga against homophobia was cancelled by Cuba’s National Center for Sex Education (CENESEX) earlier this week. In a Facebook post, CENESEX wrote the event was cancelled because of “new tensions in the international and regional context.”

Despite the march only lasting for half a mile, activists in the country have hailed it as a milestone. Journalist and LGBTQ activist, Maykel Gonzalez Vivero, told Reuters: “This moment marks a before and an after for the lesbian, gay, bisexual and transgender community but also for Cuban civil society more generally.

“Social media is playing its role and civil society demonstrated it has strength, and can go out onto the streets if necessary, and from now on the government will have to take that into account.”

Homosexuality has been legal in Cuba since 1979, but in 1959 the LGBTQ community were persecuted and murdered under the rule of Fidel Castro, as they were viewed as being a “deviation incompatible with the revolution.”

The country has only recently adopted anti-LGBTQ discrimination measures, but despite plans for its new constitution to allow same-sex marriages, religious groups were able to pressure the government into dropping this measure.