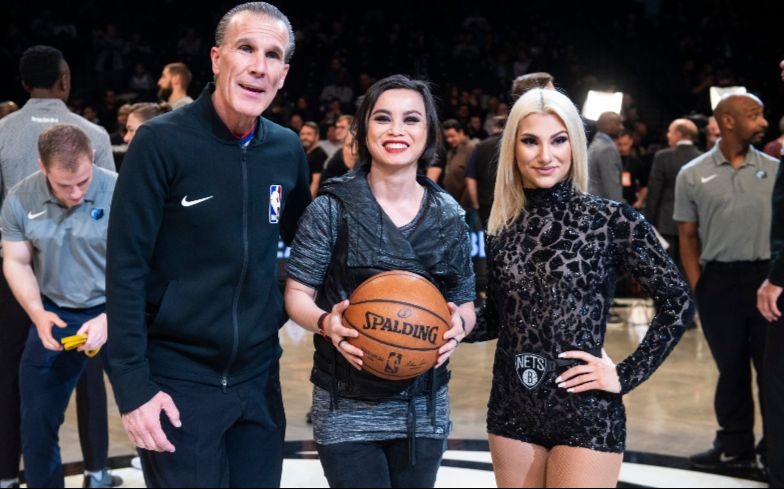 Amazin LêThị has become the first Asian LGBTQ athlete to be honoured at the Brooklyn Nets Pride Night. The event celebrates diversity and inclusion with LGBTQ athletes and allies.

Amazin was honoured with the Game Ball Delivery because of her work in increasing LGBTQ and Asian representation in sport. In 2014, she became the first Asian Athlete Ally ambassador and in 2019 the first Asian Stonewall Sports Champion.

Speaking to GAY TIMES about what the honour means to her, Amazin said: “It is an amazing honour to be the first Asian LGBTQ athlete and activist to be recognized at the Brooklyn Nets fourth Annual Pride Night at the Barclays Centre in Brooklyn, New York with the Game Ball Delivery for my global LGBTQ sports activism and the role I play as the first Asian Sport Champion Ambassador for Athlete Ally and Stonewall UK.

“I realise the responsibility I have as an openly out Asian LGBTQ athlete and activist and the global platform that I have to champion LGBTQ equality in sports.

“This recognition is so much bigger than me because it’s a moment in history for the visibility of Asian LGBTQ athletes and I want my story to provide a positive message for any LGBTQ or Asian athlete who wants to be openly out in sports and life.”

Also honoured during the event was RTS president and CTO, Allyn L. Shaw, who was awarded the Jason Collins Award for Courage and Leadership on-court during the game. The award is given to LGBTQ individuals or organisations for their courage and leadership on issues of LGBTQ inclusion.

Before the event, there was a panel for invited guests from the sports industry and LGBTQ youth experiencing homelessness from Ali Forney Centre and the LGBTQ Centre in New York.

On the panel were Amazin, Allyn, the NBA’s first active openly gay player Jason Collins and the managing editor of The Grio, Gerren Gaynor.

To find out more about the Amazin LêThị, click here. You can also find her on Twitter.

Related: Sport Ambassador Amazin LeThi on how to improve Asian and LGBTQ representation in sport