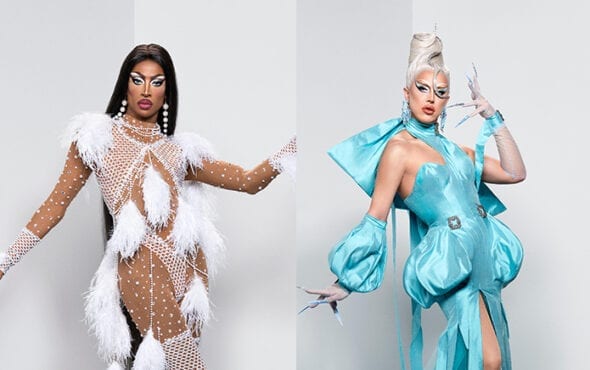 “Their best is our worst.”

A’Whora and Tayce have spilled some juicy T on the second season of RuPaul’s Drag Race UK.

In our recent digital cover interview with the entire cast, the two fierce contestants didn’t hold back as they made several bold statements about the quality of the long-awaited sophomore season.

“Make no mistake baby, the lip-syncs are the gag. You are not ready!” teased Tayce, after stating the season improves on its debut when it comes to “the runways, the lip-syncs, the twists and the turns.”

Her comments prompted A’Whora to say: “I don’t think any lip-sync from the last season is on par with the worst of our lip-syncs of this season. Their best is our worst.”

The Nottingham-born contestant, who currently lives with Tayce in London, also compared season two to a “k-hole” and said that it was an “achievement to come out of it alive”.

“I will never look at Drag Race the same ever again,” she revealed. “For me, a drag fan and as a viewer, it is one of the best seasons of Drag Race ever. It’s changing what Drag Race has ever been.”

The other contestants also had nothing but praise, with Ellie Diamond describing season two as a “cyclone of madness” while Cherry Valentine called it “the best series I’ve ever seen”.

Veronica Green said: “To use an American phrase, it’s going to be gag-worthy. It really felt like for the first time in a long time, that reality television was actually representing reality as well.

“It’s not just entertainment, and we’re taking the nation along with us.”

Premiering 14 January on BBC iPlayer, it will see the return of RuPaul, Michelle Visage, Graham Norton and Alan Carr, with Alan and Graham joining the panel on a rotational basis.