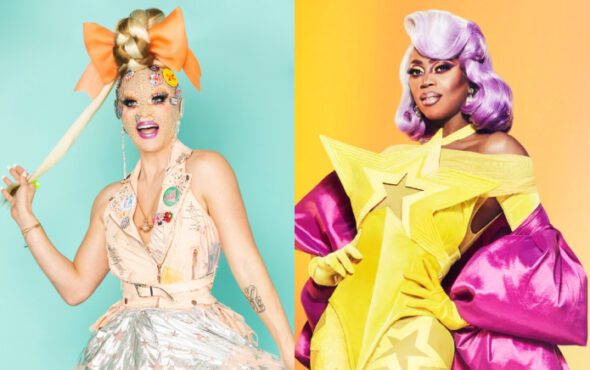 Death Drop, which played at London’s Garrick Theatre earlier this year, is to embark on a tour this autumn.

We had an absolute riot when we went to see the Dragathie Christie murder mystery at the Garrick Theatre on London’s West End a few months ago, and we’re delighted to learn that it’s now going on tour this autumn.

Excitingly, the show will be touring with an all-star cast, including RuPaul’s Drag Race US queens Willam and Ra’Jah O’Hara, Drag Race UK star Vinegar Strokes and the show’s writer – and the West End’s most beautiful leading lady – Holly Stars, with more names still to be announced.

Willam said: “I had so much fun in the West End, I’m now excited to be touring the UK in Death Drop, a spectacular drag musical murder mystery. No spoilers please (I did it!)”

Vinegar said: “Absolutely thrilled to be back on Tuck Island and touring the UK in this killer production. Whoever wants to buy me a drink, make it a double Redrum!”

Set in 1991, Death Drop tells the story of a group of guests who have gathered on Tuck Island for a soiree like no other.

Tensions rise as they reveal more about their suspicious pasts, and one by one they start to sashay away. Will there be anyone left alive to find out whodunnit? Pick up a ticket to find out!