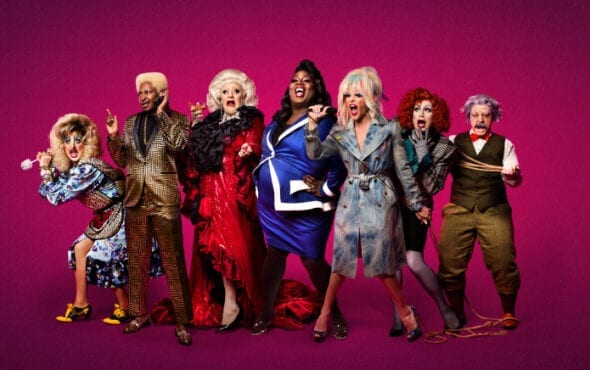 Sometimes a little escapism is just what we need, and after the year we’ve had, we’ve been gagging to get back out to venues and enjoy some live entertainment. Holly Stars, writer of the show, has delivered exactly the tonic we needed. In Death Drop, we have the perfect antidote; two hours of dazzling and delightfully camp comedy, delivered by a brilliantly-talented cast of drag queens and kings, lighting up the stage from the moment the curtain lifts. Now, we’re not ones for exaggeration, but we pretty much didn’t stop laughing for the whole show. You won’t want to miss this one.

Holly’s script is superb and the cast really bring it to life in a raucous fashion. Over the course of the evening, we’re introduced to our leading ladies Willam as pop singer Shazza, Latrice Royale as weather presenter Summer Raines, and Britain’s Got Talent star Myra DuBois as the mysterious Lady. LoUis CYfer as an insufferable Conservative MP, Don One as an overly-friendly film and TV producer, and Anna Phylactic as a despised newspaper editor complete the cast, alongside Holly who plays the three triplets hired to cater the event. Everyone absolutely brings their A-game to this ridiculous, hilarious show.

The premise is pretty straightforward – the year is 1991 and the mysterious Lady has carefully curated a guest list for a dinner in honour of Charles and Diana’s 10th wedding anniversary. Over the course of the evening, members of the party meet a variety of gruesome ends. Will the remaining guests be able to unmask the murderer before it’s too late?

We don’t even know where to begin with the praise for Death Drop – it grabbed us from the opening scene and didn’t let go. The gags come thick and fast; both acts feel punchy; the pace is relentless; it’s the most ridiculously fun adrenaline rush you could imagine. Myra opens the show, in her typically understated manner, with one of the most preposterously overblown opening numbers we’ve ever witnessed, delivered in her, ahem, unique singing style. Holly really had us cackling throughout the show, with her deadpan delivery frequently catching us off guard, and a protracted poo joke – which we assumed would quickly become tiresome – only became funnier as the show progressed.

Willam and Latrice are both excellent and evidently have a real chemistry on-stage – their scenes are a highlight. We saw some of the punchlines coming, and yet we still couldn’t help but laugh as the timing of the delivery was spot-on. Willam has a couple of musical numbers too – both authentic-sounding ’80s-inspired pop tunes with a healthy dose of humour thrown in. Speaking of the songs, they’re composed by hilarious comedy duo Flo and Joan – we particularly enjoyed the first act’s closing number ‘Til the Next One Drops’ but they’re all universally excellent.

We could go on and on about what we loved in Death Drop – it’s choc-full of wonderfully dated ’90s references and nods to British culture. Viennetta? Check. Cassette tapes? Check. Laugh-out-loud tributes to iconic Eastenders scenes? Check. It so specifically feels like it’s been written for drag fans in the UK and for that reason we absolutely adore it.

After the most recent lockdown, frankly it’s a treat just to be able to see drag live on stage in a theatre again. But Death Drop is so much more than simply a drag show – it has a brilliantly witty script, superb songs, and the queens are serving some absolutely sickening looks. It’s camp, creative, chaotic, raucous, vulgar… and it absolutely slays. We couldn’t have loved it more – do yourself a favour and pick up a ticket today.