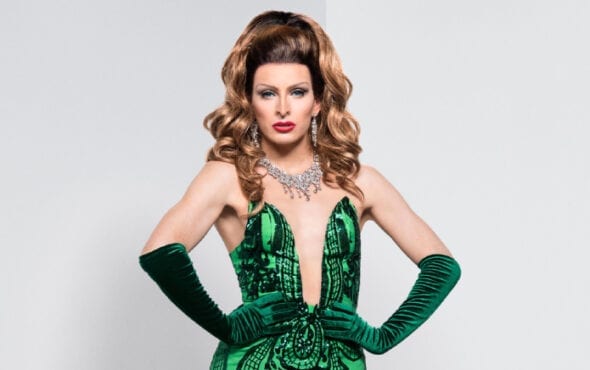 “That was what set the wheels in motion.”

Veronica Green has credited the legendary lip-sync between Raven and Nicole Paige Brooks as one of the reasons why she started drag.

The star, who made her Drag Race debut on last week’s UK season two premiere, said she and fellow alum Vinegar Strokes were “amazed” at their fearlessness (and fierceness).

“Vinegar and I met on a on a job about ten years ago and we both saw it on TV,” Veronica told GAY TIMES during our exclusive cover interview with the cast.

“Four years later, me and Vinegar started doing drag around about the same time. That was what set the wheels in motion. It made me realise that this is something that you can make a career out of.”

Veronica added: “It’s not just a hobby. Drag Race is a stepping stone of my journey into drag.”

Diving further back, the Lancashire-born entertainer said the first drag queen she saw on TV was RuPaul as Racial Tensions in the classic comedy To Wong Foo, Thanks For Everything Julie Newmar.

“I obviously didn’t get any of the references or puns as an eight-year-old or whatever,” she explained. “But just seeing that moment where all the queens were on the stage, that captivated me.”

Later, Veronica described the second season of RuPaul’s Drag Race UK as “gag-worthy” and “the first time in a long time, that reality television was actually representing reality”.