These Drag Race stars are Charlie’s Angels in hilarious parody 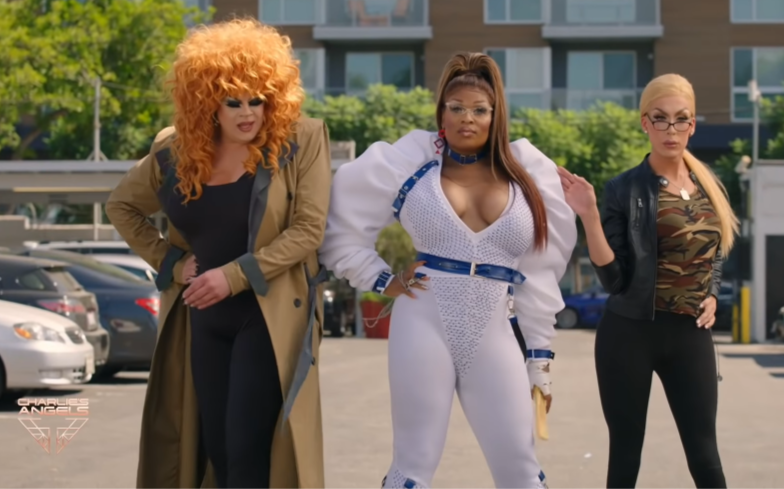 Alaska, Nina West and Peppermint are the Charlie’s Angels we didn’t know we needed.

As the 2019 reboot of Charlie’s Angels nears our screens, you can expect a high number of parodies to be coming out. And one of the most important has recently landed, as VH1 teamed up with some of the cast of the reboot for this iconic short.

Starring Drag Race legends Alaska, Peppermint and Nina West as Bo-Slay’s Angels, played by who else other than RuPaul, the short sees the three take on a “wig-snatcher”

To catch this “weavil maniac” and stop the “code red she-mergency”, Alaska scours the internet, Peppermint prepares a beautiful white wig, and Nina West prepares a laser system. With their trap laid, the wig thief can’t resist, and the trio unmask her as Season 7 and All Stars 2 star Katya.

Katya reveals to the trio she’s been “snatching wigs just as the crown was snatched from me”, before Alaska declares that her “reign of hairor” stops now. Katya is then dispensed by the angels through tongue pops, high vocals and twerking.

After Katya is defeated, Peppermint tells her, “You have the right to remain basic. Any look you wear can and will be used against you.” As she concedes defeat, Katya quips: “I should’ve been an accountant.”

Bo-Slay then congratulates the angels, telling them “If you can’t save yourself, then how in the hell are you gonna save somebody else?”

As the music plays, the film’s main theme Don’t Call Me Angel, and the queens relax, they’re approached by Elizabeth Banks and the cast of Charlie’s Angels, Kristen Stewart, Naomi Scott and Ella Balinska as a lip-sync assassin is on the loose.

You can watch the hilarious parody below, or by following this link.