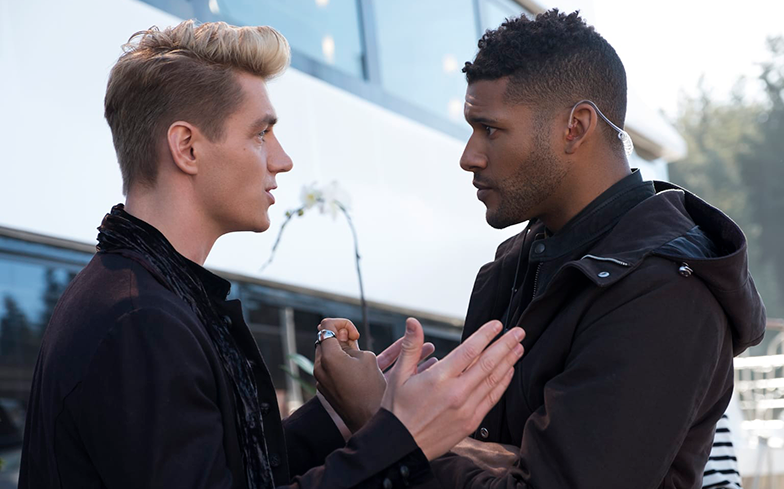 These are all available to stream right now.

Amazon Prime are slowly catching up with Netflix to become one of the most reliable streaming services for content, with a range of original programming and first-run syndicated television shows that can’t be viewed elsewhere.

LGBTQ representation on our screens is at an all-time high (GLAAD found that the amount of queer characters has increased by over 100 to a new record), so in celebration, we’ve rounded up the best LGBTQ shows you can watch on the platform.

The CW’s science fiction drama follows a group of post-apocalyptic survivors who return to Earth 97 years after a nuclear apocalypse that wipes out a majority of the population. The series attracted a significant LGBTQ following thanks to the relationship between lead character Clarke (Eliza Taylor) and Lexa (Alycia Debnam-Carey). The seventh and final season will premiere later this year.

In this acclaimed fantasy drama, Hollyoaks star Ricky Whittle plays former convict Shadow Moon who crosses paths with a fellow called Mr. Wednesday (Ian McShane) who oh-so happens to be Odin (Thor’s old man). He soon becomes embroiled in a large-scale war between the Old Gods and the New Gods. It’s one of the queerest shows on Amazon Prime, with the third episode of its debut season featuring “more erect (prosthetic) penises than have been seen on TV before” and LGBTQ characters such as Jinn (Mousa Kraish), Sam Black Crow (Devery Jacobs) and Salim (Omid Abtahi). Pose star, legend and icon Dominique Jackson has also been cast in the third season.

This iconic fantasy series stars Sarah Michelle Gellar as the titular character, a teenage girl endowed with supernatural abilities to fight vampires, demons and the forces of darkness. It is often referred to as one of the most influential dramas of all time and made history when it aired the first ever lesbian sex-scene on network television. We recently rounded up the queerest moments from the series, which you can view here.

Set in a universe where superpowered people are recognised as heroes and influencers to the general public, The Boys focuses on a team of vigilantes who aim to take down the corrupt members of ‘The Seven’; the world’s premier superhero team (think Justice League or The Avengers). It’s a fresh take on the superhero genre and features a gay storyline with one of the lead characters, which we hope will be explored in further detail in the upcoming second season.

Neo-noir series Carnival Row stars British model and actress Cara Delevingne as Vignette Stonemoss, a “pansexual fairy” who is forced to take refuge after humans invade her war-torn homeland. She begins a forbidden love-affair with detective Rycroft Philostrate (Orlando Bloom), and as they attempt to keep their romance a secret, a string of mysterious murders plague the city.

Okay, so it’s not the queerest show out there. However, fan-favourite character Jack McPhee (Kerr Smith) made headlines when he came out in a two-part episode in 1998, and was later part of the first man-on-man kiss on network television in the United States with recurring character, Ethan Brody (Adam Kaufman) in 2000. Groundbreaking, yas. It’s safe to say that Jack helped many struggling queer teens come to terms with their identity at a time when queer people received little to zero representation on screen.

Horror-themed reality competition Dragula offers viewers with a spooky-twist on RuPaul’s Drag Race as the show searches for the World’s Next Drag Supermonster. For its third season, the show features drag king Landon Cider, which is the first time the art-form has been represented on reality television in the United States. It also features sickening queens such as Dollya Black, Evah Destruction, Louisianna Purchase, Maddelynn Hatter, Maxi Glamour, Priscilla Chambers, St. Lucia, Violencia Exclamation Point, and Yovska.

Fox’s musical drama centres on a fictional hip-hop company, Empire Entertainment, and the drama between the founders’ family members as they fight for control. The series made strides for gay African-American men on the little screen, with main character Jamal Lyon (Jussie Smollett) breaking boundaries as an openly gay R&B singer-songwriter.

Created and written by Phoebe Waller-Bridge – who also stars in the title role – the BBC series focuses on Fleabag, an angry, depressed and sex-crazy woman living in London. The show is notable for breaking “the fourth wall” on various occasions, where the protagonist speaks to the camera and addresses the audience. In the show’s second season, Fleabag came out as bisexual, receiving praise from fans for providing some much-needed bisexual representation on television. Last year, the show received 11 Primetime Emmy Award nominations including Outstanding Comedy Series and Outstanding Lead Actress in a Comedy Series.

Ryan Murphy’s musical teen series focuses on several students in the fictitious William McKinley High School glee club, as they navigate issues such as sexuality, race, gender identity, bulimia, pregnancy and school violence. In the first season, Kurt (Chris Colfer) struggles with his sexuality and his feelings for Finn (Corey Monteith) and in later years, becomes romantically involved with Blaine (Darren Criss). They were later named “one of the most beloved TV couples of the millennium”. Naya Rivera also received widespread praise for her portrayal as Santana, a popular, hard-as-nails cheerleader at McKinley who embarks on a friends-with-benefits-esque relationship with fellow cheerleader, Brittany (Heather Morris). Glee was nominated for 19 Emmy Awards.

Shonda Rimes’ medical drama tells the story of several surgical interns, residents, and attending physicians at the fictional Seattle Grace hospital. Since its debut, the show has been commended for its diversity; over the course of 16 seasons, we’ve been introduced to characters who are lesbian, gay, bisexual and trans, so pretty much the entire LGBT acronym, which many shows have failed to do. After 239 episodes over 11 seasons, fan-favourite character Callie (Sara Ramirez) became the longest running queer character in television history.

Mockumentary sitcom Modern Family follows the lives of Jay Pritchett (Ed O’Neill) and his extended family, all of whom live in the suburbs of Los Angeles. Eric Stonestreet and Jesse Tyler Ferguson have received universal acclaim for their portrayal as gay couple Cameron Tucker and Mitchell Pritchett, both receiving Primetime Emmy Awards. It’s been on the air for over 10 years, spanning 232 episodes (so far), making it ABC’s longest-running sitcom in history.

Based on the weekly column published by The New York Times, Modern Love explores “love in its multitude of forms – including sexual, romantic, familial, platonic, and self love”. Andrew Scott and Brandon Victor Dixon star as Tobin and Daniel, a same-sex couple who take in a pregnant woman – played by Olivia Cooke. The series received positive reviews and has been renewed for a second season. Here’s hoping we see more from Tobin and Daniel when it premieres later this year.

Inspired by Mozart in the Jungle: Sex, Drugs, and Classical Music, this half-hour comedy stars Bernal as Rodrigo, the new conductor of the New York Symphony. Saffron Burrows plays bisexual philandering cellist Cynthia Taylor who forms a relationship with Mol’s character Nina Robertson. Despite its critical acclaim and devoted fanbase, the show was cancelled after four seasons last year.

In Transparent, Jeffrey Tambor stars as Maura Pfefferman, a retired college professor of political science who finally opens up to her family about being trans. It became the first show produced from a streaming service to win the Golden Globe Award for Best Series. After Tambor was fired in 2017 after several sexual harassment claims were brought against him by various cast members, Amazon Prime cancelled the series and announced a feature-length finale titled Musicale Finale, which was released last September.

Do we even need to?

Shiri Appleby (Roswell) stars in this juicy drama as Rachel Goldberg, a producer on a reality dating series called Everlasting, who will do anything and everything to stir up drama for ratings. It’s bitchy, outrageous and manipulative af, and definitely one of the most underrated television series of the last decade. Jeffrey Bowyer-Chapman, who has made several appearance on RuPaul’s Drag Race, co-stars as Rachel’s queer right-hand man Jay Carter.

Australian drama Wentworth focuses on character Bea Smith (Danielle Cormack) and how she rises to the top of a prison hierarchy. Although the first four seasons feature her as the central character, season five onwards develops more of an ensemble format. It has been renewed for an eighth and ninth season, meaning it will be on our screens until 2021, with the ninth serving as the final season.

Set in New York City, the show focuses on the relationship between Will Truman (Eric McCormack) – who became one of the first and most well-known fictional gay men to enter into people’s homes – and his best friend Grace Adler (Debra Messing). The show earned 18 Primetime Emmy Awards and 83 nominations and has been credited with helping and improving public opinion of the LGBTQ community; former Vice President Joe Biden once said the show “probably did more to educate the American public” on queer issues “than almost anything anybody has ever done so far”. It originally ran for eight seasons between 1998-2006, but returned in 2017 for two more seasons. The upcoming 11th season will be its last.

Related: 32 of the best LGBTQ shows you can watch right now on Netflix.