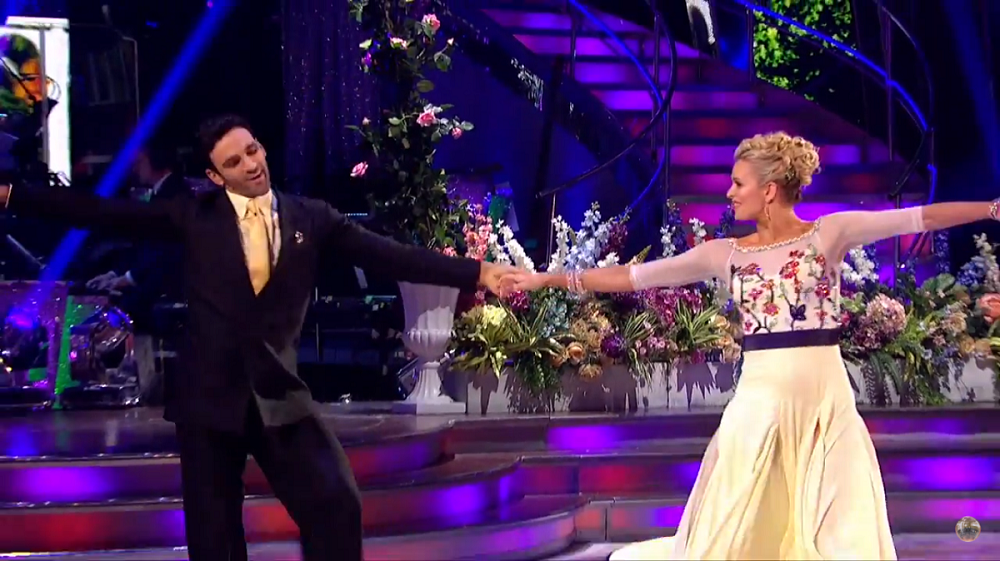 Coming away from Halloween week, Strictly was always going to be a little bit disappointing, but we weren’t prepared for it to be this disappointing… Many of the people who seemed to be frontrunners failed to deliver, but more on them later.

Last week, Simon Rimmer’s time on the show finally came to an end. However, Halloween week did leave us with one final trick as Mollie King ended up in the dance off alongside him. But, this may have been a blessing in disguise. Given the skill gap between Mollie and Simon, she was never in any real danger, so all in all, it was just another opportunity to listen to Kylie Minogue, and see AJ in that sexy devil outfit.

Moving back onto the disappointments of this week, Aston Merrygold, Mollie King, and Gemma Atkinson all failed to deliver the routines that they were usually capable of leaving them fairly close to the bottom of the leaderboard. Jonnie Peacock’s salsa looked pretty awkward, and even though we love Alexandra Burke, we weren’t feeling her cha-cha-cha. Dare we say it, but we think it might have been overmarked.

That said, the night wasn’t a complete write-off. Susan Calman performed a very good jive, and got herself up near the top of the leaderboard. Joe McFadden did a brilliant charleston, and Davood did an absolutely beautiful American smooth. And of course, we can’t heap praise on the dancers without mentioning Debbie McGee’s tango which saw score the first 40 of the series.

And we also saw quite a bit of comedy throughout. Ruth Langsford’s paso doble was quite possibly the most entertaining routine of the series so far, and a small mix up during the judges’ comments left it uncertain as to whether Shirley or Bruno were meant to speaking. Speaking of Bruno, his face as Craig worshiped Debbie was a picture to behold.

Of course, there was something more refreshing than all of those moments put together. And that was Susan’s wife visiting her during her VT, and as much as we could go on about it, we feel this tweet sums it up perfectly:

Refreshing to see Susan's wife introduced, featured and credited on #Strictly with no fanfare, no big deal. Just perfectly normal. Nice one.

And now that’s all out the way, let’s get to some of those dances.

They say the charleston is the actor’s dance, because of how much character you get to put into it. Well, Joe certainly lends credence to that saying by delivering one hell of a charleston.

Channeling all of his acting prowess, Joe delivered plenty of character from his facial expressions, to his little head wiggle. And he delivered lots of plenty basic charleston with loads of great moves. And sorry Craig, but we have to disagree with out and say that there was lots of swivel in there.

Related: The 3 dances from this weekend’s Strictly that will make your jaw hit the floor

One of the things we love about the charleston is how great some of the lifts can be, and Joe and Katya certainly delivered on those. Especially with that final move! Trust us, if we tried that here in the Gay Times office it’d end in a total disaster.

Davood hasn’t impressed much since his cha-cha-cha in the first show. Sure, we liked his rumba last week, but sadly the judges didn’t. And although they were fans of his jive, we weren’t. But this time, it seems like we’re all in agreement.

The American smooth is a dance that demands charisma and suaveness, and seeing as Davood oozes both of these characteristics, he was always going to perform well in the dance. And perform well he did. He looked like he enjoyed it throughout, and every move was delivered flawlessly.

And although we said it about Joe’s charleston, but the lifts in Davood’s dance were brilliant. And much like Joe, his final lift took our breath away, especially since it could have ended so terribly. We still can’t forget Ed Balls nearly dropping Katya last year in a similar lift…

Debbie McGee proved she could dance with her breath-taking paso doble at the start of the year. Now, she has well and truly delivered with this terrific tango which got a perfect score.

We do love a good tango, and although there looked to be a moment at the start where she looked off balance, Debbie managed to perfectly capture the mood of the dance. And as ever, her beautiful legs were on full display, and she had perfect body contact with Giovanni – we’re not jealous, honest. At this point what does Debbie have to do to get the honour of closing the show?

It shouldn’t have been a surprise that Debbie was the first celeb to get a perfect 40 given her previous dance experience. But honestly, who cares? There’s always a celeb with dance experience who does the show, and as it turns out they never win. Instead we just get to watch some great dancing.

And we can’t leave you without Ruth’s paso doble. Forget the technique, just watch it for the entertainment. And as the song comes from one of our favourite drag films, Victor/Victoria, it also serves as a timely reminder to crack that classic out.

Strictly’s next live show is next Saturday at 18:45 on BBC One. And if you still need Strictly magic in your life Strictly: It Takes Two will be on every weekday at 6:30 pm on BBC Two. However, on Fridays, It Takes Two starts at 6:00 pm.