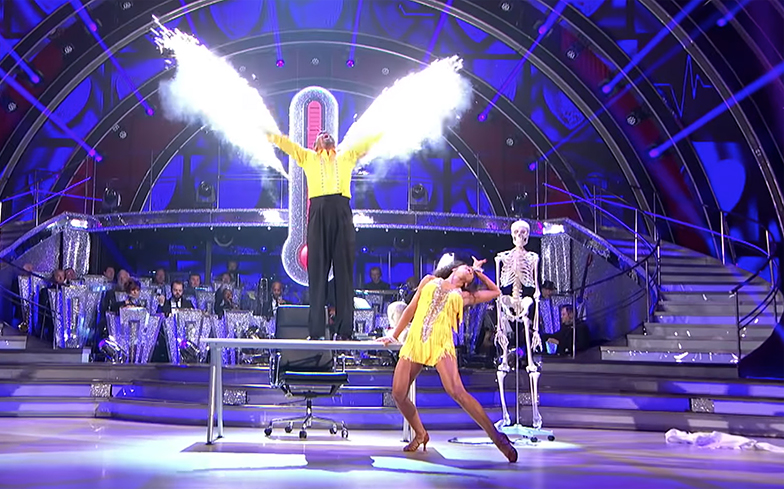 With an average viewing audience of 8.9 million people, Strictly Come Dancing is definitely back.

Two weeks ago we sat in awe at the launch show of this year’s Strictly, watching nervous celebs getting paired up with their professional partners. And after two weeks of training – or two days in the case of paralympian Lauren Steadman – we got to see the results.

And there was certainly a lot of variety in the dances attempted. We saw several cha-cha-chas alongside a few waltzs, a Viennese waltz, two jives, a tango, a foxtrot, two sambas and even a quickstep.

But what’s more surprising than the type of dances attempted is that the production team took a break from lazy song choices themed around a celebrity’s job, for the most part. Yes, we had Graeme Swann doing his samba to a song heard at test match cricket, and Danny John-Jules danced to the Top Cat theme in homage to his Cat character from Red Dwarf, but other than a newsdesk and doctor’s office theme to Kate Silverton and Dr. Ranj Singh’s routine there wasn’t a hint anywhere.

Related: Strictly’s Anton du Beke says that he would dance with a man on the show

And even some of the outfit’s looked different from usual. Craig Revel Horwood and Bruno Tonioli sporting a no tie look, Bruno ended up looking so casual he could of immediately hit the clubs after broadcast.

And the judges were just as they were like last year. Dame Darcey Bussell had to scold Bruno multiples times after he kept cracking up over her mentioning the word ‘lust’, Bruno himself was always out his chair, Craig compared Susannah Constantine’s performance to a drunk person stumbling around lost at party, and head judge Shirley Ballas was not happy with Seann Walsh’s hair.

But putting clothing aside, after all this is a dancing competition, many of the dancers delivered on their promise. It was really no surprise that Ashley Roberts and Faye Tozer would be sharing top spot on the leaderboard, and they definitely gave out the strongest performances of the night.

Danny John-Jules delivered a solid performance, but I was expecting a bit more from him, although I imagine Latin will be more his playground. And Joe Sugg and Dr. Ranj smashed all preconceptions about themselves. I barely saw anything of them in the group number at the end of the launch show, and what I had seen wasn’t anything special, and yet their performances were easily my favourite ones of the night.

Another strong performer was Lauren Steadman. As we said earlier, she confessed to having only done two days worth of training, on account of having to travel to Australia to win gold at the ITU World Championships. Her waltz was beautiful, serene and any other adjective of a similar meaning we can throw at it, and she’s capable of doing that from just two days, imagine what she’ll be like with the full week of training.

Charles Venn, Stacey Dooley and Lee Ryan all delivered solid routines for their first week, despite the latter almost falling over. Graeme did a lot better than we expected, and although the judges weren’t a fan I still really enjoyed Kate Silverton’s cha-cha-cha.

But after those performances, there isn’t really much to say. I expected a lot more from Vick Hope, but the jive really didn’t suit her, and Seann and Susannah delivered exactly what was expected, with Susannah’s dress-centric opening to her samba netting her the lowest ever score for one – yes, even lower than Ann Widdecombe’s. And considering what’s happened to Katie Piper she gave an admirable performance, and hopefully we’ll see her come out of her shell.

Even though it’s only week 1, I can easily see Joe and Dr. Ranj in the finals. Lauren can go far, but with three others having some form of dance experience, they could easily trump her when it comes to the dance-off. Hopefully Ashley will make the finals as Pasha needs to after having three early eliminations in a row, and like Debbie from last year it’d be nice to see Danny prove that age isn’t barrier. Although, with that said it would be a tragedy if Faye wasn’t there.

You can check out why I think Dr. Ranj and Joe will go far below.

As for early eliminations, although Vick could be a shock one, we imagine that after this week she’ll pull something out of the bag for next one. I imagine the public will be behind Susannah and Katie for a while, and as Graeme seems to be the stronger dancer than Seann, we could see him and the reigning Strictly champion making an early exit next week.

Now, that’s what we thought, but what did you think? Vote in our poll below to let us know what your favourite routine was from last night.